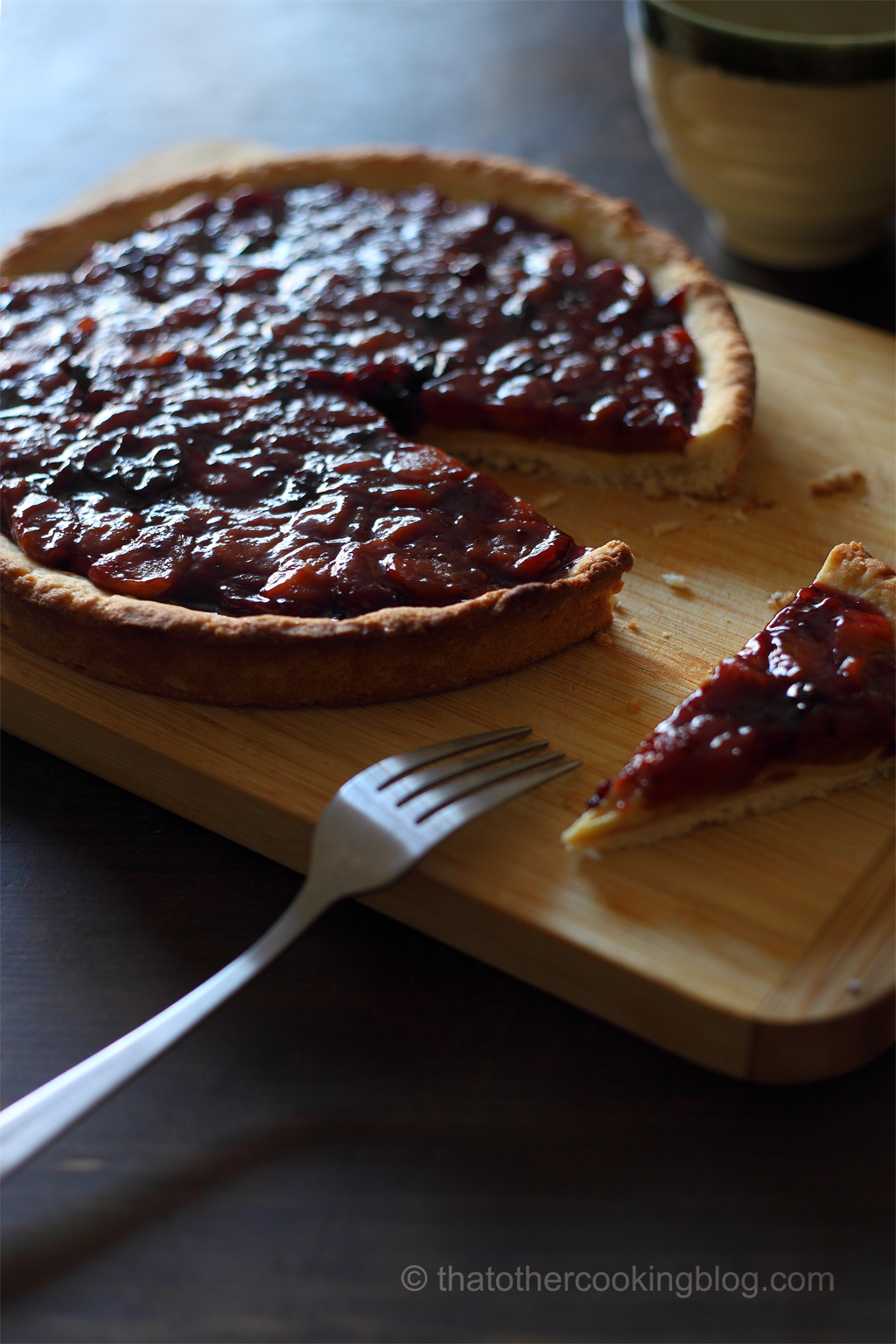 For the trained eye, those adept at baking and pastry making (hopefully not, because I need some encouragement here but I’m ready and could use some constructive criticism), this tart will show some basic execution flaws, like the walls aren’t thin enough or tall enough, and the filling doesn’t reach the edge of the crust uniformly, but I gotta start somewhere. I still wanted to post it because it tasted really delicious and it is a step in the right direction I hope.

My first tart tatin for example, yes, you guessed it, in the trash can.

That didn’t stop me, oh no. After that incredible tart tatin disaster a few weeks ago, I decided I would try a simpler tart. A basic apple tart. Which would involve blind baking so I could practice that skill as well. The fruit is cooked separately and then added over a layer of silky pastry cream, all of this goodness over a crumbly pre cooked tart crust.

I used a small amount of black currant preserve that I had bought at a store a while ago which had been waiting patiently in my fridge to find a purpose in life. I figured since I didn’t have enough apple filling, I’d combine it with it. Greatest thing that ever happened to this tart.

Baking tarts and their fillings together is great, I love things that can go in the oven and come out ready all in one step. But this is not possible in all cases. I learned the hard way. I saw one of my test tarts, the crust would go darker and darker while the raw apple filling would continue to stew stubbornly without browning. It cooked but it didn’t developed that beautiful caramel hue.

The reason is related to the thickness of the fruit, the way and shape it has been cut, and the amount of water in it. Sugar caramelization can only occur well above the boiling point. That’s why we bake most things at 350F or higher if we want them to brown. As long as there’s water in the fruit, the temperature will remain at boiling point. Thin slices of fruit will caramelize a lot faster than bigger chunks because water dries out quicker. I used a melon scoop to get nice apple spheres to go on my tart. These little spheres will require so long to caramelize that the pie crust will burn before it’s done.  So they will cook separately while the crust is “baked blind”

Blind baking simply means, cooking the crust on its own. This is a great way to add extra control in the process of making tarts. Many tart shells can be cooked and store in the freezer until ready to use. They can be fully or partially baked. In the case of this recipe, I fully baked the shell. A couple of things to keep in mind when blind baking.

This pie has 3 components all of which can be cooked separately and at different times. Each component on a different day. The crust can be frozen and used weeks later. The apple filling should stay in the fridge for a solid week no problem. The pastry cream, about the same, although I’d suggest using it a bit earlier. But if all the prep is done correctly and nothing goes wrong, this whole process should take less than 2 hours.

To make the pie crust.

Get your oven going now, 400F, it will be nice and cozy by the time you’re ready to bake. Combine the dry ingredients in a bowl, whisk to incorporate. Cut the chilled butter in small cubes, about 1/4 of an inch thick. Add to the flour. Using your index and thumb fingers, press the little cubes into the flour, patiently. You can use a food processor, which probably could get you a better final product, but I hate cleaning the damn thing so I used my hands instead, plus I want to be able to make this anywhere without depending on a food processor.

I believe you can get a pretty awesome pie crust if you are just patient, and work the butter until it breaks into smaller finer flakes. If you store the flour in the freezer like I do, the cold flour will help keep the butter cold longer, and your pie crust will thank you for it. Avoid working with soft butter, it will separate and make for a denser and tough crust. I also use eggs right out of my fridge for this crust. Everything should be cold. Beat the egg and add it to the bowl. Don’t fuss with it too much, we don’t want to develop gluten or too much of it.

Fold the egg into the flour mixture, allowing time for the flour to hydrate with the egg and form into a ball in the middle of the bowl. Cover with plastic wrap. Place in the fridge for at least 20 minutes.  The colder the better… so longer in the fridge is better. I sometimes throw it in the freezer, of course, don’t let it freeze. When ready. Have a flat floured surface and a rolling pin ready. Squash the ball down, and form a disk of about an inch high. If the disk is too crumbly, and breaks everywhere, you could knead it a little bit but keep this to a minimum.

Roll out until you have a disk that’s larger than the tart dish by an inch or two. Oil or butter the pie dish and lay the dough on it. With the help of your fingers, press it down onto the dish. I use a knife to trim the excess dough that hangs over the dish edge, you can use the rolling pin as well. Just place the rolling pin over the dish press down and roll up and down, and that should do it.

Cut a couple of squares of tin foil (larger than the tart dish by a couple of inches) and line the tart dish, pressing the tin foil lightly against the dough. Let the overhang foil alone. It will protect the crust edge when baking so it doesn’t brown too fast. Place the baking weights over the tin foil and press gently making sure the weights conform to the shape of the tart. Stick the tart dish in the oven and bake for about 20 minutes. The crust will set at this point and partial browning can be seen. Remove the weights. Bake for another 10-20 minutes. It’s done. Store the crust in the freezer if you arent ready to use it right away, you could also let it rest on the counter. Be careful when handling it though. The pie dish will be very hot.

To make the apple filling.

While the dough is resting and all that blind baking business is going, take advantage of the idle time and work on the apples and the pastry cream. Peel the apples and using a melon scoop, carve out as many apple spheres as you can from each apple. Why use a melon scooper? Because its fun. Heat up the butter and olive oil on a skillet and add the sugar, the apple spheres and the cinnamon. Cook on medium for about 30 minutes. Tossing every minute to make sure you get a nice uniform golden color on all the spheres. A caramel will also form and coat the spheres. Keep cooking until you are happy with the caramelization. Add the currant jam to the hot pan, and allow it to melt a bit. Toss and mix apples and currant jam well. Remove from heat, add the lemon zest and the splash of lemon juice. The apple spheres will be very soft so handle them carefully so they don’t break.

For the pastry cream.

Place the milk and the vanilla extract in a sauce pan, and bring to a boil, then lower the heat and keep the milk very hot but not boiling. Cream the yolks and sugar in a separate bowl. Add the flour and the cornstarch. Whisk until a uniform paste forms up. Slowly, pour the hot milk into this bowl and whisk to incorporate. It’s not mayo, so you can add the milk a bit at a time and whisk then add more milk until the mixture is uniform. Add this mixture back into the saucepan where you heated the milk, and bring to a simmer slowly, constantly whisking. The mixture will thicken rather quickly. Remove from the heat just before you’re happy with the thickening. Carry over heat will finish the job. You can later adjust it. If it got too thick which is usually the case, add some milk, doesn’t even need to be hot, and whisk until uniform. I like the consistency of mayo in my pastry cream. For pies, tarts, and filling pastries, make sure the cream is not runny.

To assemble the currant tart.

Simply spread a uniform layer of pastry cream over the bottom of the pie crust. I don’t like to use too much cream. Makes the tart too rich and heavy. I like the fruit filling to stand out.  Up to you. The layer should be about 1/8 inch approximately. Place the tart back in the freezer so the pastry cream hardens a bit. This way when the apple filling is added, you can spread on top of the cream and avoid the 2 mixing. Makes a prettier pie when the layers occupy their own spaces! After 10-20 mins, remove tart from the freezer and add the apple filling spreading it uniformly over the pastry cream-covered bottom. Place in the fridge. This pie is great cold or at room temperature.  I like to let it sit in the fridge overnight and bring it out the next day for prompt consumption 🙂 Enjoy! Tart season is officially on here at that other cooking blog! 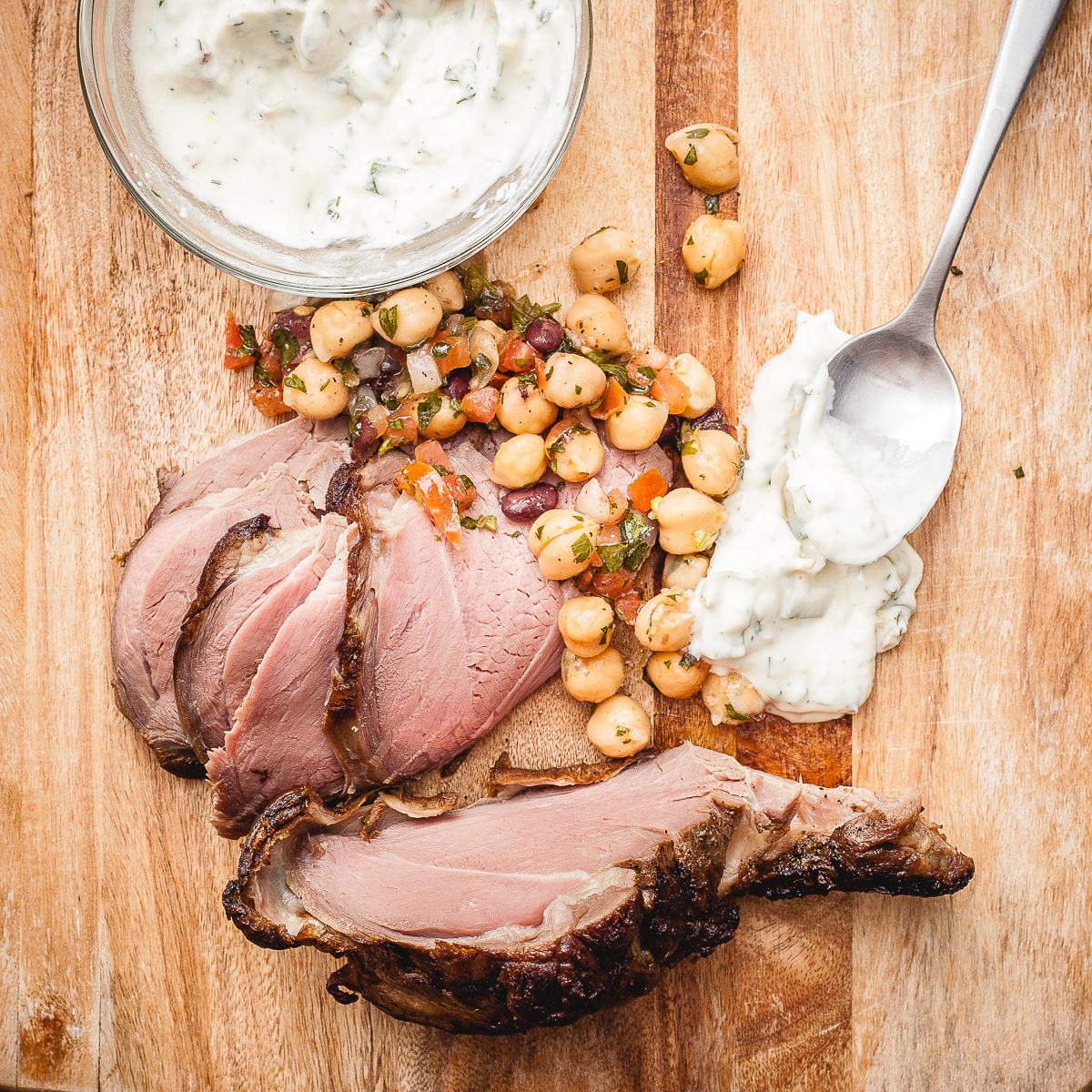 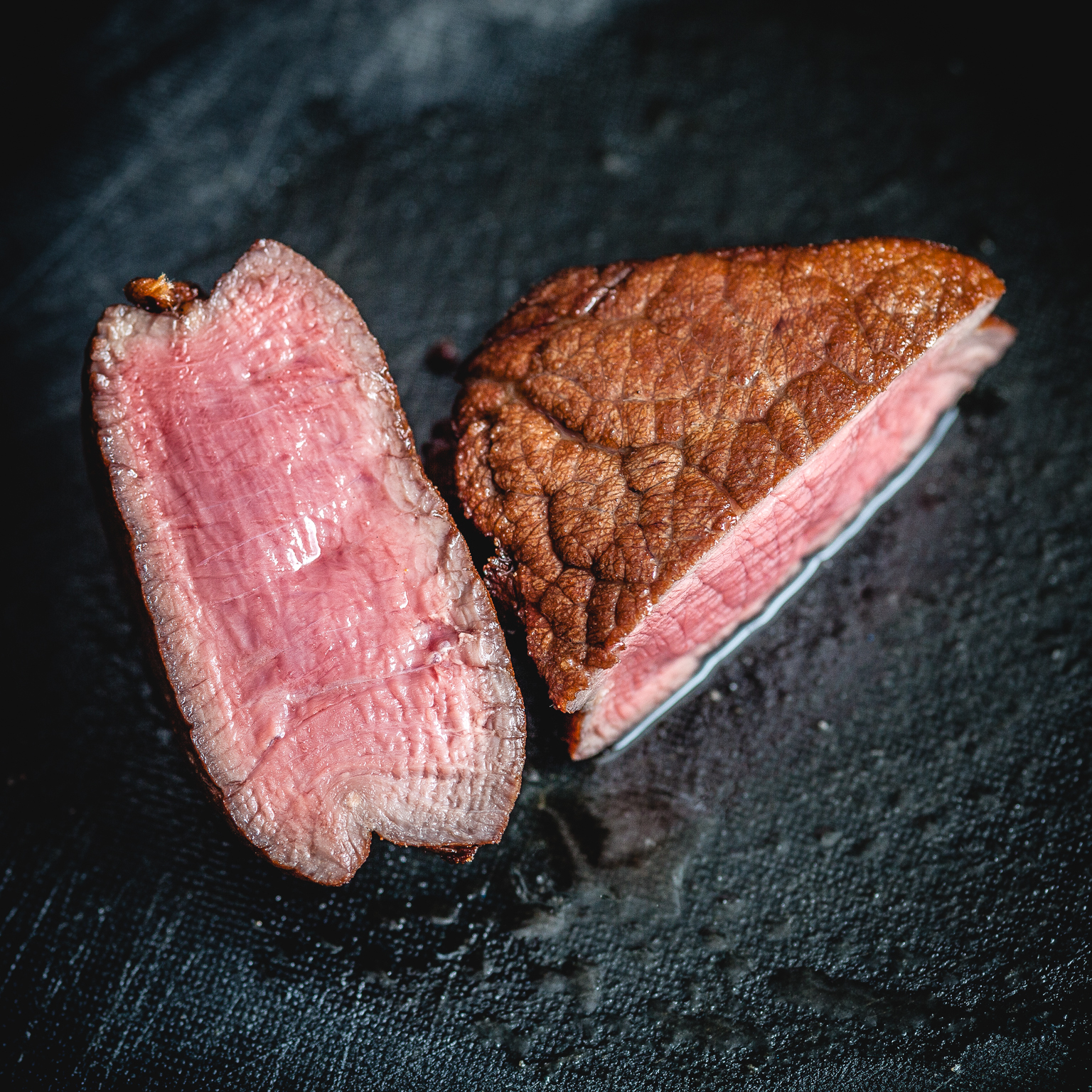