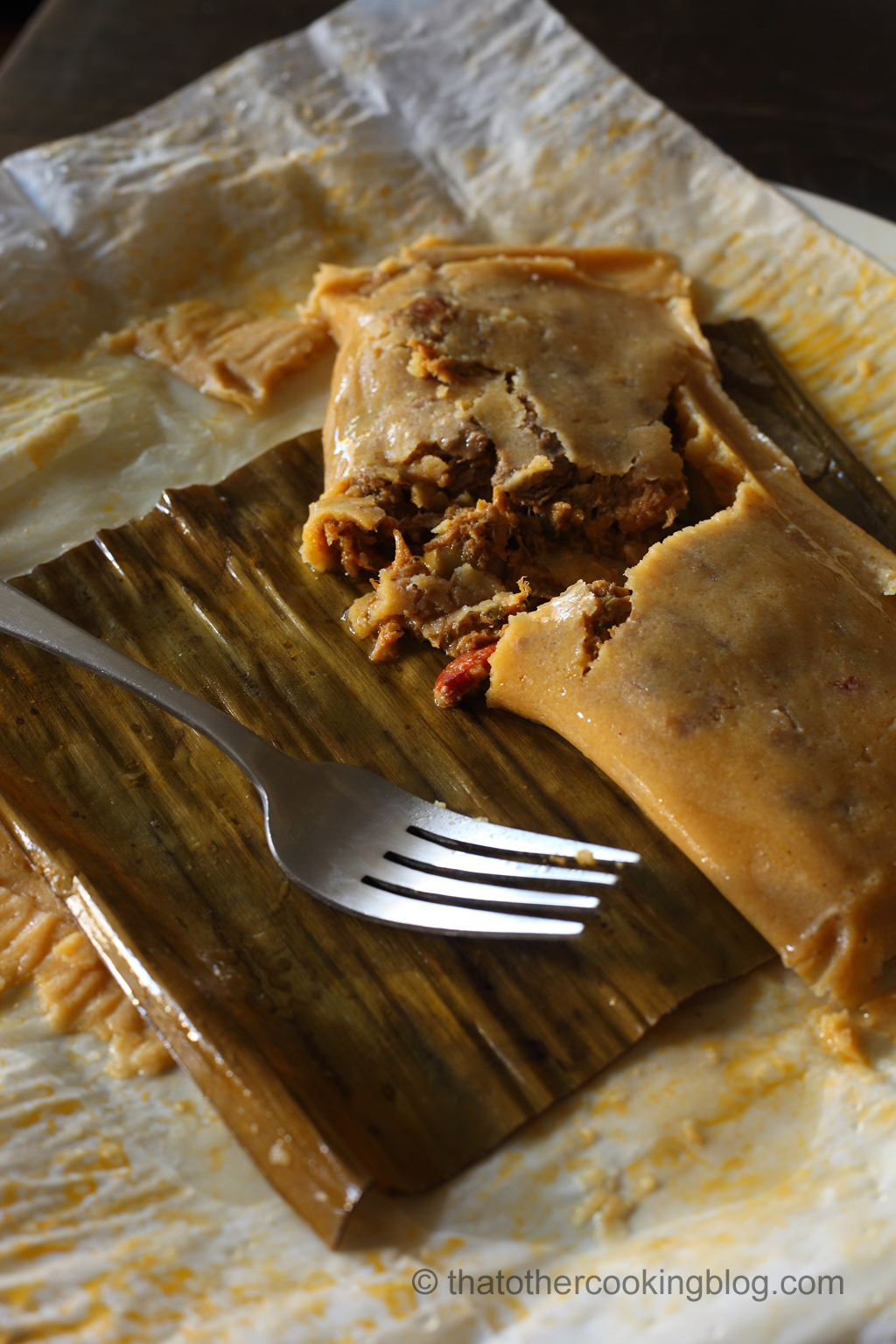 First. Hope you all had a wonderful Christmas.  Second. Hope you all had plenty of your favorite Christmas delights. Third. We’re here to talk about Hallacas. I’ve posted about this dish a couple of times in the past. We venezuelans eat hallacas only around christmas and new years time. It’s a very popular dish of indigenous origins and spanish influences. It’s also similar to the even more popular mexican tamale or the puerto rican pastel. We usually make them in large batches. 30, 70, 200 hallacas, depends on how many people are willing to serve time in the kitchen for an entire day wrapping portions of masa dough and stewed meat in green plantain leaves. Takes forever and has to be done under the influence of alcohol to make the task bearable. I’m talking 3, 4 sometimes 5 hours, just to wrap the little suckers, back breaking work. Bigger families are better off during this ritual.

I made mine with the help of my sister. We made about 30. Took about 13 hours of work. Ok, under normal circumstances, it would have taken about 10 (I’ll talk about what went wrong and how the mistake was corrected). As horrifying as this all sounds, it’s worth the human sacrifices involved. I don’t know what my favorite thing to eat is, because it changes depending on the time of the year, but I could eat hallacas any time, any day, all day, for days, forever. Maybe this is my favorite thing to eat in the world. People share hallaca recipes, they’re given as presents, you give a family 10 hallacas, but you get 15 of theirs back…… hallacas everywhere, you eat them 3 times a day sometimes, it’s like madness, they freeze extremely well, and after a long night of heavy drinking and partying, a warm hallaca in the morning (or mid afternoon) can mean the difference between feeling like a zombie in no celebratory mood or being ready to rock all over again.

Veggies for the stock:

Spices and herbs for the stock:

(I’ve modified the traditional wrapping technique to speed up the process, hardcore venezuelan traditionalists, bear with me please)

Break down the chicken. Skin the breasts and legs. Reserve skins, wings and back (for stock). Pressure cook the chicken in salted water (add enough salt as if you would for pasta) for 1 hour (about 2 1/2 in a regular pot). Once cooked, allow to cool. Shred, remove the bones. Strain the cooking liquid, this is chicken essence really.

Brown the pork and beef in batches. Hot pan or cast iron dutch oven, with some oil (this takes forever, because it’s a lot of meat and I only had one hot pan going, but I “used the force” and pulled through). I added pinches of salt here and there, I believe salt helps develop flavor. Deglaze with waster or wine as you go, don’t leave any brown bits behind. This is essential and will make your hallacas stand out from the rest… trust me! Place browned meats on a tray and reserve.

Browning the stock ingredients. In the same pot used to brown the meats, add plenty of olive oil and fry the chicken wings, skins and back. You could roast them in the oven as well, but I was lazy, and wanted faster browning. Turn chicken stuff a couple of times, when you get a nice golden color, remove from the heat.

Time to make the chicken stock. Add the browned chicken pieces to a stock pot. Again, I used my pressure cooker. Add the veggies. I cut all the vegetables in half lengthwise, not need to chop them up. Cover with enough water. In this version of hallacas, I extract the flavor from the veggies and discard the veggies themselves. No worries, there’s no flavor left after one hour of pressure cooking or 2 of conventional simmering. Don’t add salt. Strain the liquid and reserve.

Time to make the stew. Add some olive oil. Add the tomato sauce. Cook on medium heat until tomato is cooked and has darkened in color. Add the meats. Simmer with the tomato for a a few minutes. Add 1/2 of the stock. Save the rest of the stock to make the masa dough.  Cook until all the liquid has evaporated. We want concentrated flavors. I don’t use store bought stocks or bouillon cubes, so a little more work is needed to achieve lots of flavor, but let’s be honest, who wants their 13 hour labor love tasting like a knorr or maggi product? … yeah, I rest my case.  Ok, here is a tricky part in the process. Adjusting the stew fattiness… I worked with very lean pork this time (it’s what I found at the store) and the stew beef had little fat too. I found myself dealing with a rather lean (dry) stew. I don’t like to thicken stews with starches if I can help it. I added a few tablespoons of lard, until it looked glossy and beautiful. Taste as you go. You don’t want to taste fat, just awesomeness. Keep cooking. I want to make sure the lard has spent some time in the pot cooking along with everything else. It took about 3 hours to get the batch of stew ready. The proteins need time to breakdown. 30 minutes before the end of cooking time, add the spices. 10 minutes before the end of cooking time, add the herbs. Adjust salt, pepper. Remove the bay leaves when done.

To make the annatto tinted oil. In a small saucepan. Heat up about 1/3 of a cup of olive oil. Add the annatto seeds. And heat up until lightly bubbling. Remove from the heat. allow to rest. The coloring agent in the annatto will be released and the oil will be of a bright deep orange color, which we’ll use to tint the dough and add that beautiful color to the hallacas.

To make the masa dough. Add the corn flour in a big bowl or stock pot. Add the stock. Combine. Add some of the plantain leave stock. This flour can absorb lots of liquid. About 2 times its volume, if not more, before it starts to become over-hydrated (which happened to me… read on). So, for every cup of flour, make sure you have 2 cups of liquid. I honestly don’t measure anything during this process and I taste as I add liquids, salt or annatto tinted oil (don’t add the annatto seeds) until you end with the right consistency, color and flavor. It’s hard to describe this in a simple recipe. I also add the brine liquid from the capers, pickled veggies and olives (to taste, but I have to tell you, this is where the main christmasy flavor component comes from and it is wonderful to have some acidity in the dough) The final result should taste great, as if you would want to eat it alone. Chicken stock is the main flavor, but then adding the plantain leave stock gives it that venezuelan christmas flavor that is so characteristic, and the annatto oil, gives it that rich yellow tint which is classic.

Ok, how do we put these things together. Hmm… ok, I guess I’ll give it a shot at explaining this in writing. I still ended up using some plantain leaves to ensemble them. Because the green color of the leaves are extremely inviting, and add extra flavor, but the traditional wrapping part of the deal was simplified… by a lot.

Prep ahead. Cut up a bunch of 14″ by 14″ parchment paper squares. One per hallaca. We made 30. Cut up a bunch of 10″ by 10″ plantain leaf squares. Cup up a bunch of 14″ by 14″ tin foil squares. Get a clean large ziplock bag or something similar. Spray it with some cooking oil. Get ready. Here how it goes. Place a parchment paper, place the plantain leave square in the center. Add a scoop of dough in the center, about 3 Tbsp. Place the oiled up ziplock bag over it, and press down, and spread out, making a disk, of about 3mm-4mm of thickness. Scoop about 2 Tbsp of stew and place it in the center of the dough disk. Press it down a bit.

Add the garnishes. For example, 3 raisins for some nice sweet little kicks, 1 olive, a few slices of pickled veggies, like cucumbers, onions, carrots, peppers, but only a few little slices for acidity accents. Add a slice of that julienned bell pepper for color and done.

Now, the folding. I fold them as I would a letter. Fold in half, then fold in half again. Fold the ends of this rectangle in, you want to end up with a little packet of rectangular shape. Secure this little packet with tin foil. Fold the tin foil around it in a similar fashion. The traditional method requires lots of plantain leaf folding, plantain leaf breaking, hallacas bleeding out their innards, countless disasters which the approach explained here, should eliminate.

To finish it all up. In a huge pot, or multiple pots, full of boiling water. Cook the hallacas for about 40 minutes. Remove from the water, and refrigerate, freeze or eat immediately. The hallacas are done. Time to spend the next 2 hours cleaning the kitchen.

Over hydrated hallacas…. a close call! So, I’ve mentioned that things went south for a moment. We cooked the pilot hallaca, the test, a single hallaca, just to make sure all 30 would be good. The test came back. The dough didn’t set. The dough was too creamy, with no bite, no body. THE HORROR. I’ve been making hallacas for 3 years, which means, I’ve made hallacas 3 times. This has never happened. I’ve been complaining about tamales all night that night, sipping on wine, chatting…about how most of the ones I’ve had were dry and this and that. And now I’m being punished for my ingratitude. My hallacas could very well end up in the trash at this point. Long story short. I had to place the hallacas in the oven. In batches, because couldn’t possibly “bake” all 30 at once. I don’t even want to imagine having to deal with 200 hundred. 3 hours in the oven at 350F with the oven door slightly open. And that did the trick. The hallacas had the right amount of moisture and had properly set. I was back! Christmas tradition accomplished. I’m ready to take a year off now… form making hallacas that is.

if you want to read about my previous post on hallacas check these out! 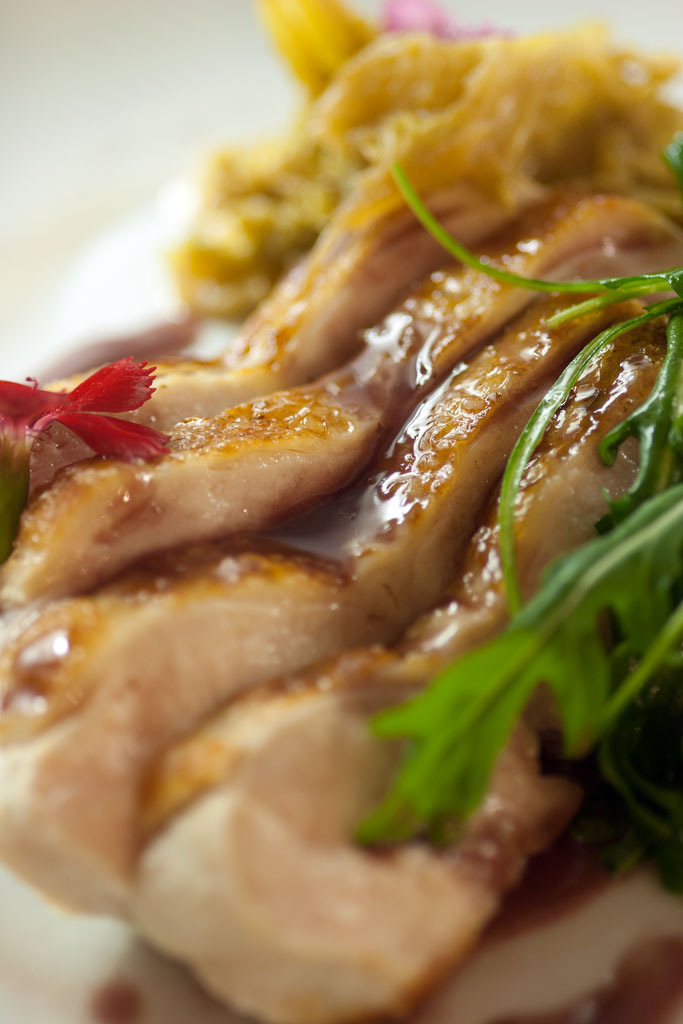 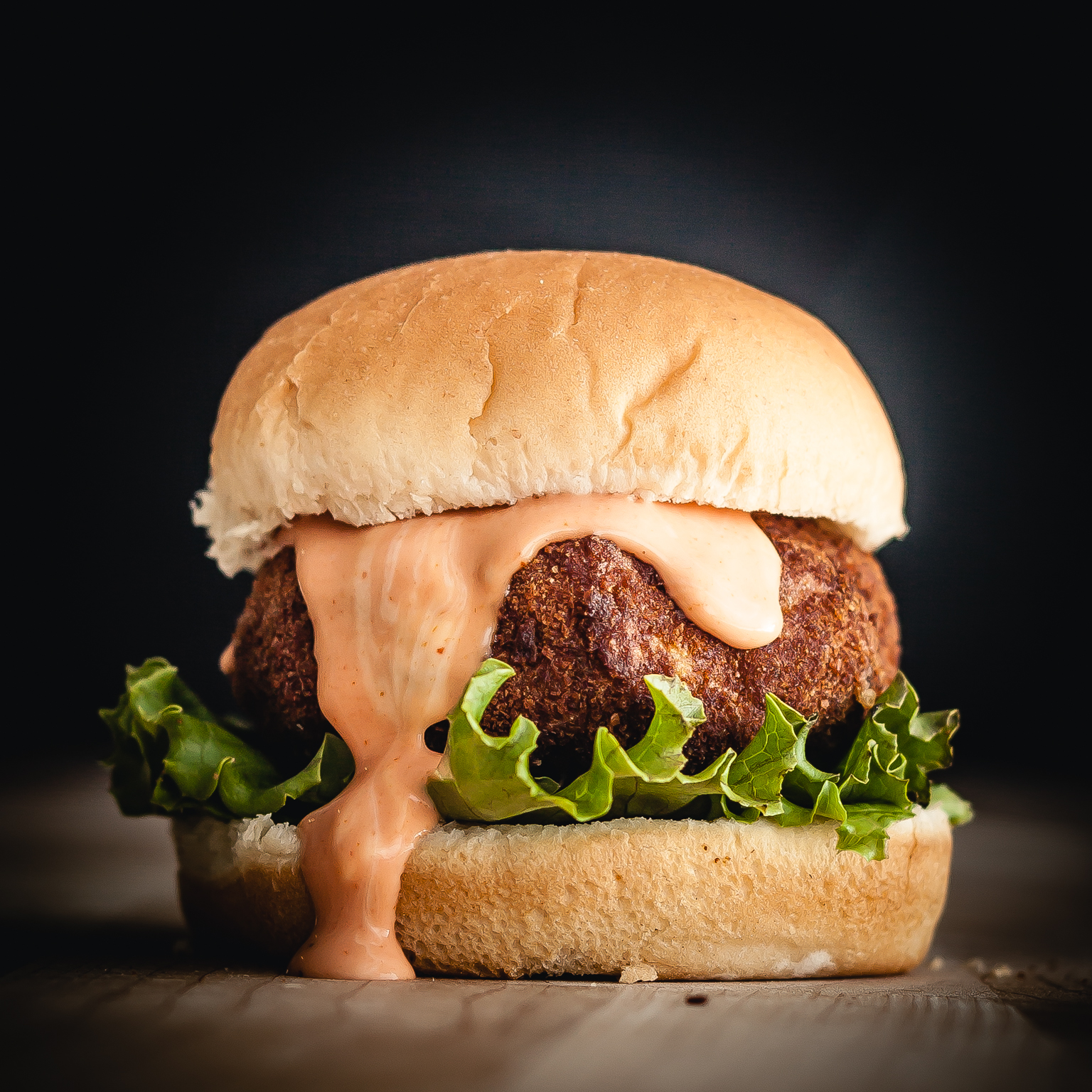 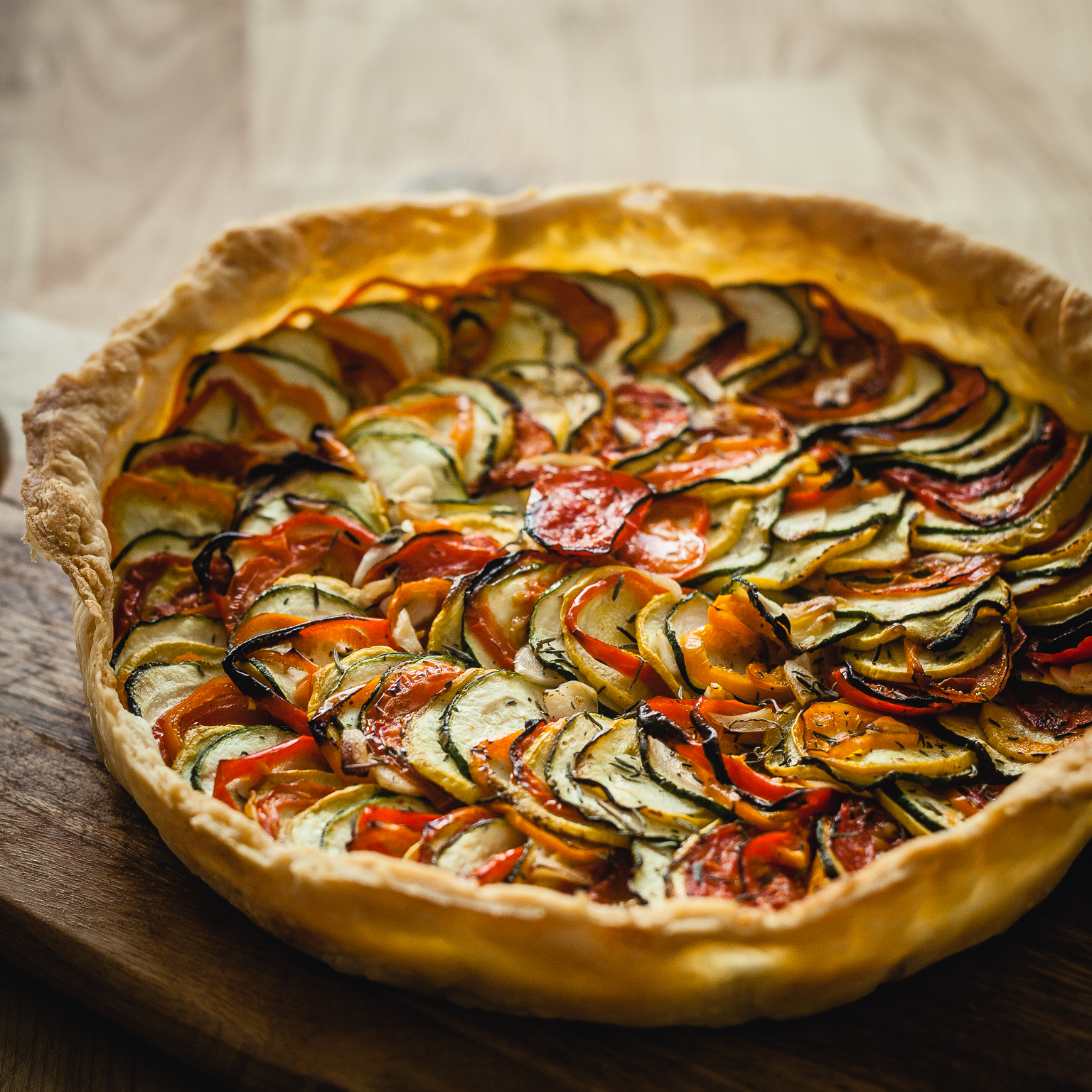