Is it worth trying sous-vide at home? 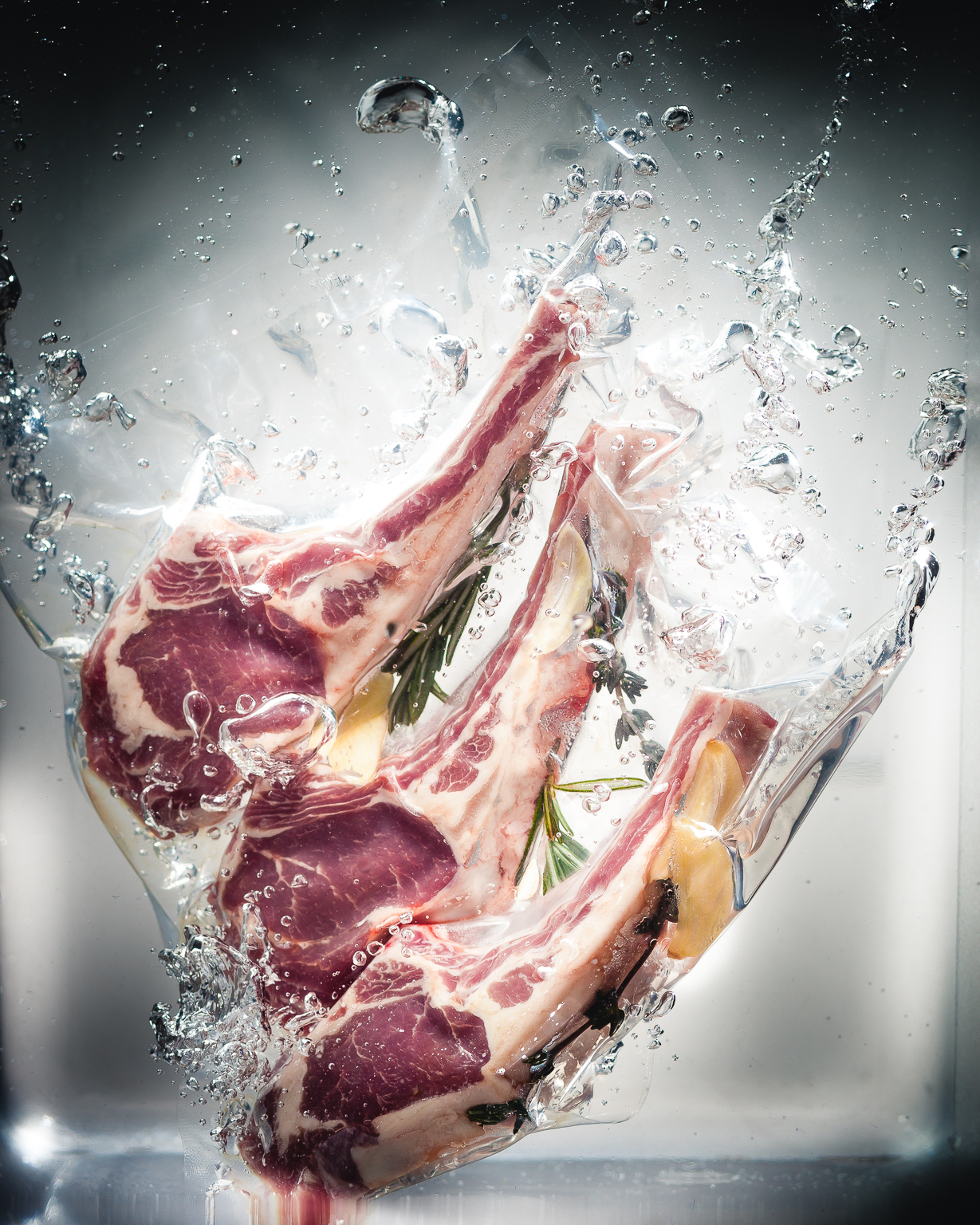 To answer this question real quick here: Yes it is.

Now the point of today’s post is to disagree with someone’s opinion about cooking sous vide. I came across this article on The Guardian about sous vide cooking titled: Is it worth trying sous-vide at home? and I couldn’t wait to write down my thoughts on the matter. No pics this time guys, sorry about that. Here we go.

Sous-vide takes the guesswork out of cooking, because it means a chef can monitor a piece of meat or fish to the nth degree and guarantee near-as-dammit-identical results every time. That’s one reason it’s favoured by supermarket ready-meal developers, for whom consistency is, of course, the Holy Grail – often at the expense of flavour. Waitrose’s new range of frozen meals, for example, which launches at the end of the month, makes great play of its use of sous-vide (which it mystifyingly describes as “innovative”: the technique was pioneered way back in the mid-1970s, in the heyday of nouvelle cuisine). Perhaps even more depressingly, though, Waitrose says its new products were developed in response to a 500% increase in searches for “frozen ready meals” on its website in the past year.

Frozen food companies using sous vide cooking as a marketing strategy… well…welcome to the world of advertising I guess…?  Now, the claim that sous vide takes the guesswork out of cooking isn’t a negative quality of the technique, in fact, all good cooking techniques aim to do the same. Any decent cookbook will try to show you times and temperatures because that’s some of the basics of good cooking. If the difference between sous-vide cooking and traditional cooking means standing by the stove carefully monitoring your pot/skillet or having time to do other stuff while your food cooks, I take the second any day. Trying to use frozen food examples to show sous vide cooking in a negative light is misleading. Frozen foods have this evil reputation nowadays… thanks, Gordon… (I love you man, but thanks…)

Another strange assertion is that of “often at the expense of flavour”. I don’t know about you, but I’ve been cooking sous vide for a long time as well as traditionally and flavor has never been compromised by the technique. I mean, I don’t even understand the claim. Sous vide has nothing to do with flavor. That’s a totally different department. It does have to do with texture though.  And if talking about animal protein… perhaps it has to do with juiciness which is directly linked to the texture thing. How the F did flavor get thrown into this?  Because of the browning step?? hmm…

To its critics, however, sous-vide is little more than boil-in-the-bag with a physics degree, and takes much of the skill, not to mention the fun, out of cooking. “It’s ideal for larger-scale, high-end restaurants that are seeking consistency and accuracy,” says Adam Byatt, chef/owner of Michelin-starred Trinity in Clapham, south London. “But is that really what you’re looking for when knocking up dinner at home?”

Here we go again with the “boil-in-a-bag” thing. Sous vide cooking is the biggest opponent of boiling anything. Actually, the whole point of cooking sous vide is to avoid needing to boil food.  Sous vide is about cooking things gently and avoiding harsh temperatures. It’s probably worth mentioning that boiling-point is the only temperature in cooking that doesn’t require monitoring so why buy the damn water heater thingy. Water just can’t get hotter than at boiling-point. Or can it….? sure it can but that’s a completely different article. But I totally digress… Sous vide cooking sure ensures consistency but it also allows the cook to achieve things traditional cooking will never be able to offer. Sorry traditionalists out there… I’m not really sorry. Sorry.

Regarding the fun part… I don’t know about you but I have just about as much fun cooking sous vide than I do cooking traditionally. I consider sous vide to be idle cooking so there’s really no need for me to be there while I can go play outside or take care of other more important shit. Traditional cooking is definitely more hands-on and quicker and I love cooking either way.  In the end, it is all about trying to get the best meal on the plate and that’s always a challenge regardless. Challenges are fun and I like those. Cooking sous vide only takes the fun out of standing by a pot or a skillet. I’ll take that… like any day.

Others are even more forthright. Rowley Leigh, a bona fide legend of the UK cooking scene, with the likes of Kensington Place and Le Cafe Anglais on his CV, takes a characteristically no-nonsense view: “A lot of us have been asking what the point of sous-vide is for years,” he says. “As far as I’m concerned, it’s employed by chefs to circumvent the annoying business of actually cooking food – mostly meat and fish – by the traditional methods of touch, feel and timing. By cooking at low temperature for a long time, the proteins never get stretched and overheated.”

Just because a “new” technique is trending isn’t a reason to bad-mouth it. I’m not a traditionalist, in fact… I can’t really stand cooking traditions in general, … there’s always a better way of doing stuff in the kitchen.  Sorry, mom, grandma, Italy, let’s throw France in there too… etc. For example, to cavemen, doing a reverse sear on a steak would have been unthinkable (keeping a steak on a low temp section of their campfire and then quickly throwing it over some red hot stones to sear… ) but to us, it’s simply amazing and quite common. Traditions have a way of getting in the way of innovation. Yep, I said that. And one day sous vide will become tradition… time to question it for sure. Especially if you’re new at cooking. Question everything.

Consistency, of course, is the hallmark of any professional outfit worth its salt, but Leigh argues that sous-vide throws out the baby with the (temperature-controlled) bathwater. “Like all ‘idiot-proof’ techniques, it has produced a generation of idiot chefs who cannot cook by conventional means.” Not only that, but many of the flavours that come from regular roasting, frying and baking “have to be faked afterwards, with blow-torches and other gadgets”, adds the cook, whose latest book, A Long and Messy Business, came out late last year. Considering you’ll also need a vac-packing machine, lots of sturdy plastic bags and a temperature-controlled water bath, the expense on kit alone is enough to give anyone the screaming heebies.

My favorite paragraph because it is full of that insecure cook’s “traditional” hatred and cynical remarks. But perhaps the writer is right, and there are legions of idiot chefs out there just because of a water heater invention from back in the ’70s. I wouldn’t know. I rarely eat out because good cooking is expensive and most restaurants are shit but not because of sous vide cooking but because of bad cooking. What I do know is that cooking sous vide has had no negative impact on the way I cook the “traditional way” and it has actually given me a significant understanding of what happens to food when subjected to heat. Scrambled eggs? Better than ever.

Regarding the “faking of flavours afterwards by use of gadgets”…hmm… Food doesn’t give a damn about your cooking gear as long as you know how to use it.  Traditional cooking methods don’t impart more of better flavor to food than a torch btw (ok, indirect heat browns way more evenly and that’s always a plus but a torch can be tweaked to deliver indirect heat too…), not that I use one often. The searing step in sous vide cooking can be done before or after (by the way…) and it can be done to any length of time, so if it is the temperature gradient you’re after… sear for longer. But if you think that flavor is compromised somehow because you’re not roasting your meat like a caveman, I don’t think there’s any difference between roasting that hunk of meat in a hot pan, in an oven, over a fire, or by using a soldering torch, a gas grill, Starwars sabers… You’re applying heat to protein. Maillard will happen. Flavor will get there eventually.

That said, Byatt admits he does use sous-vide at work, but “only for one dish. We cook brined wild salmon in olive oil at 55C for nine minutes, and the results are tremendous. Of course, I could achieve much the same in a pan of oil, but that’s very tricky during a busy service and wild salmon isn’t what you’d call cheap.”

I’m sure it’s awesome. Good for you. Cooking salmon sous vide is indeed a great way to get the most out of it. Perfect texture. Sous vide cooking does the same for any fish …, cow, turkey, piggie, crocodile, etc… I wouldn’t draw the line at salmon is what I’m saying. Yes, I said crocodile.

In short, while sous-vide has some benefits in a restaurant environment, it’s really not worth bothering with at home, unless you have more money than sense. If you enjoy the process of cooking, as Byatt does, “be prepared to be underwhelmed. And if you’ve been led to believe food tastes better cooked sous-vide, you are very much mistaken.”

So many people would disagree with this final statement. This is an undereducated opinion about cooking at least from a scientific perspective, but he’s right about one thing. Food does not taste better cooked sous vide. Sous vide cooking isn’t about improving the taste of food, that’s the responsibility of the cook. Sous vide cooking is about doneness, texture, pasteurization, etc.

Let’s wrap this up because I’ve been typing for a while and in today’s world reading isn’t all that big. I don’t care about how food is cooked as long as it is cooked well. Sous vide has a place in the kitchen, commercial or not… it definitely does in mine. It’s just another tool that enables the cook to be creative, have extra control and play more video games.

I’m not a sponsor. I don’t get paid by big corporations that manufacture sous vide thingies to say good things about sous vide. This is my personal opinion. You’re welcome to disagree. Comments below. Thanks for playing. 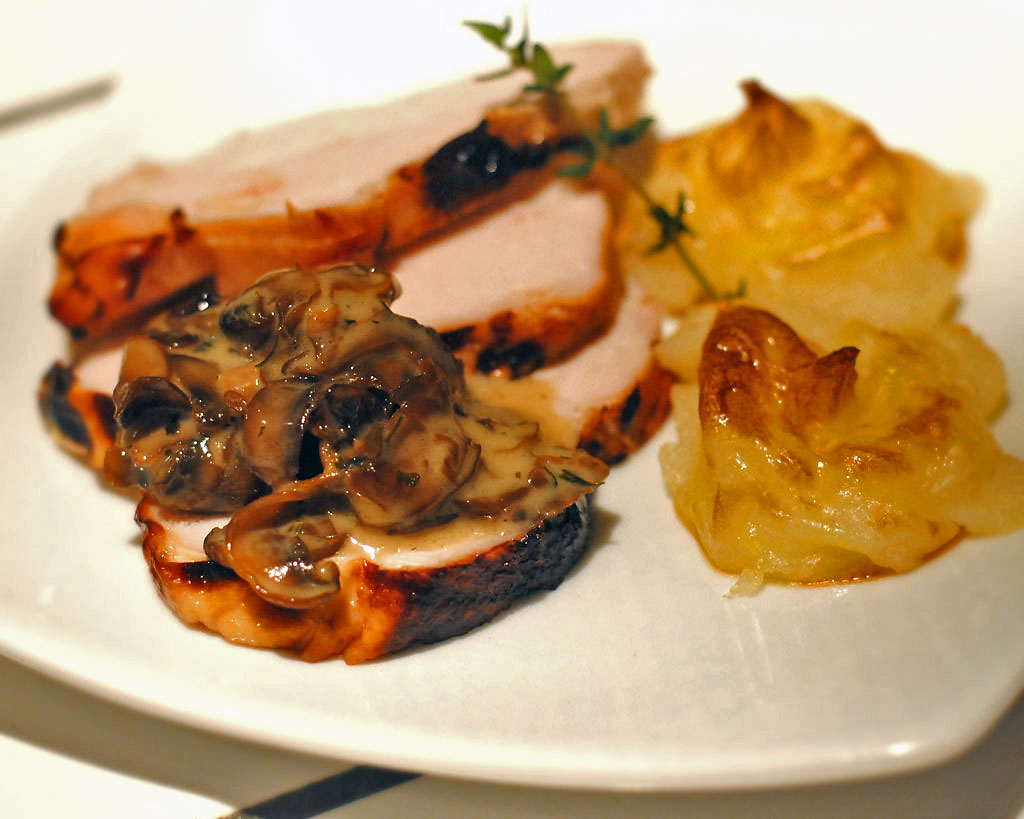 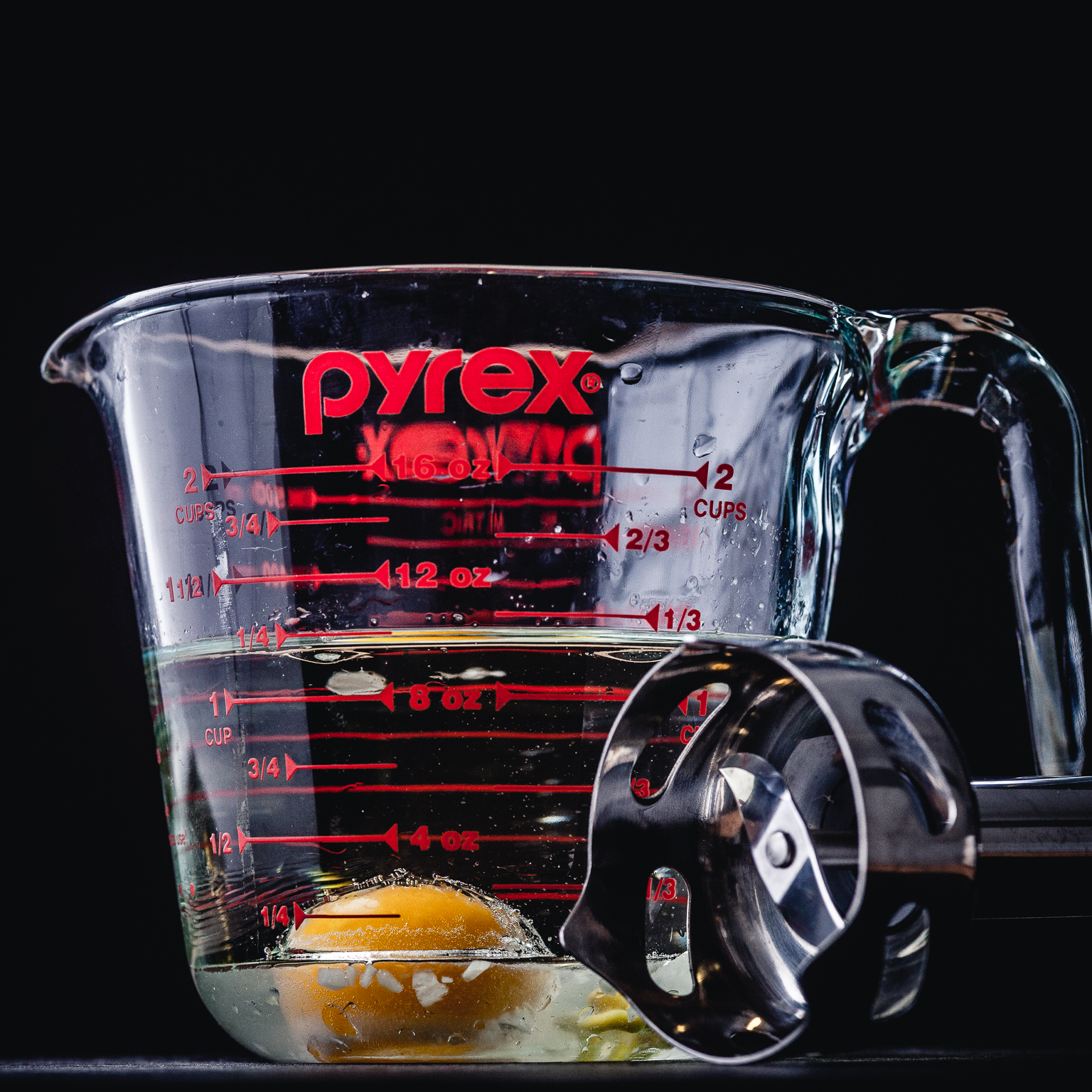 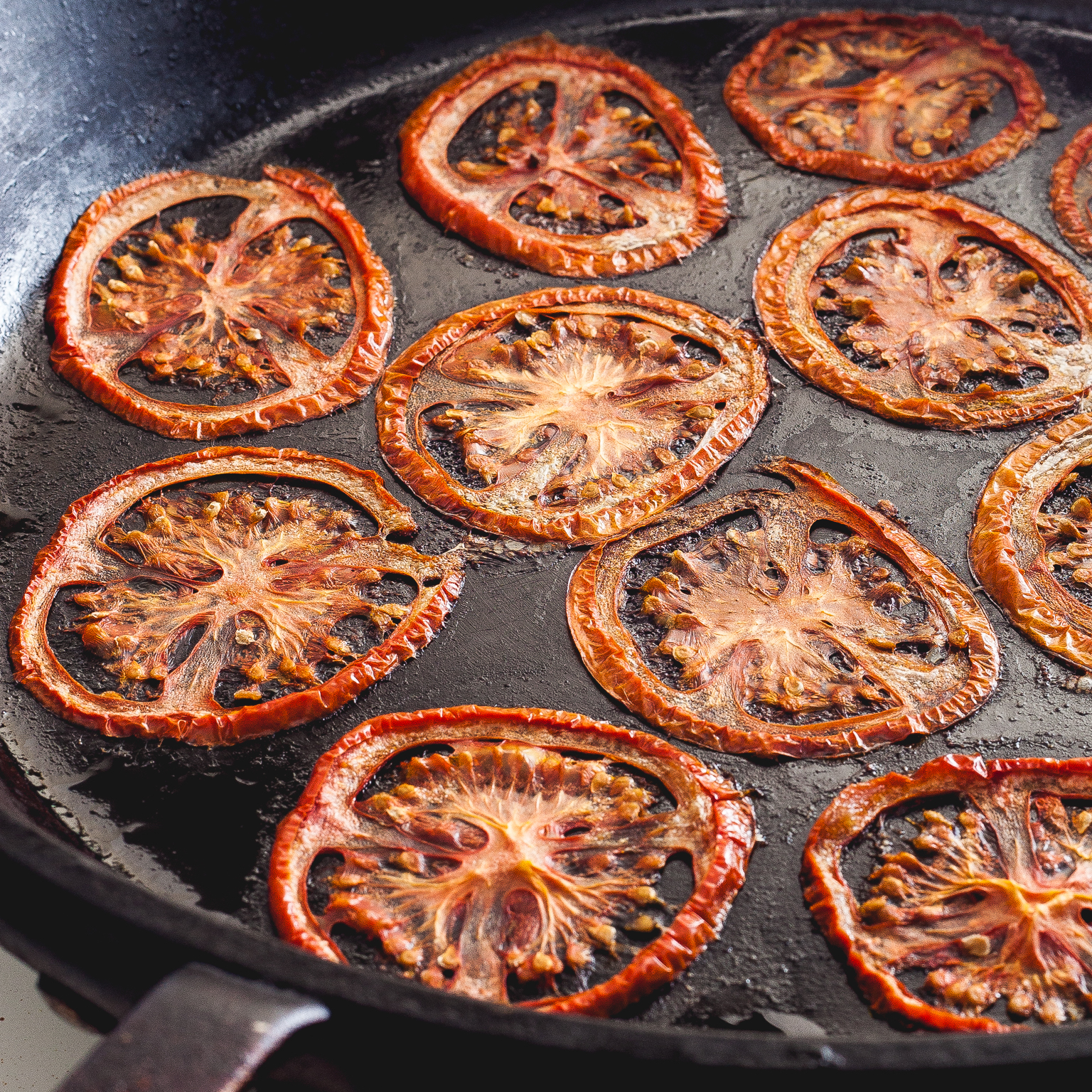 how to dry tomatoes on the stove