Open omelet with Seafood Squid Ink Rice. Almost a Fail but a Success Story in the End 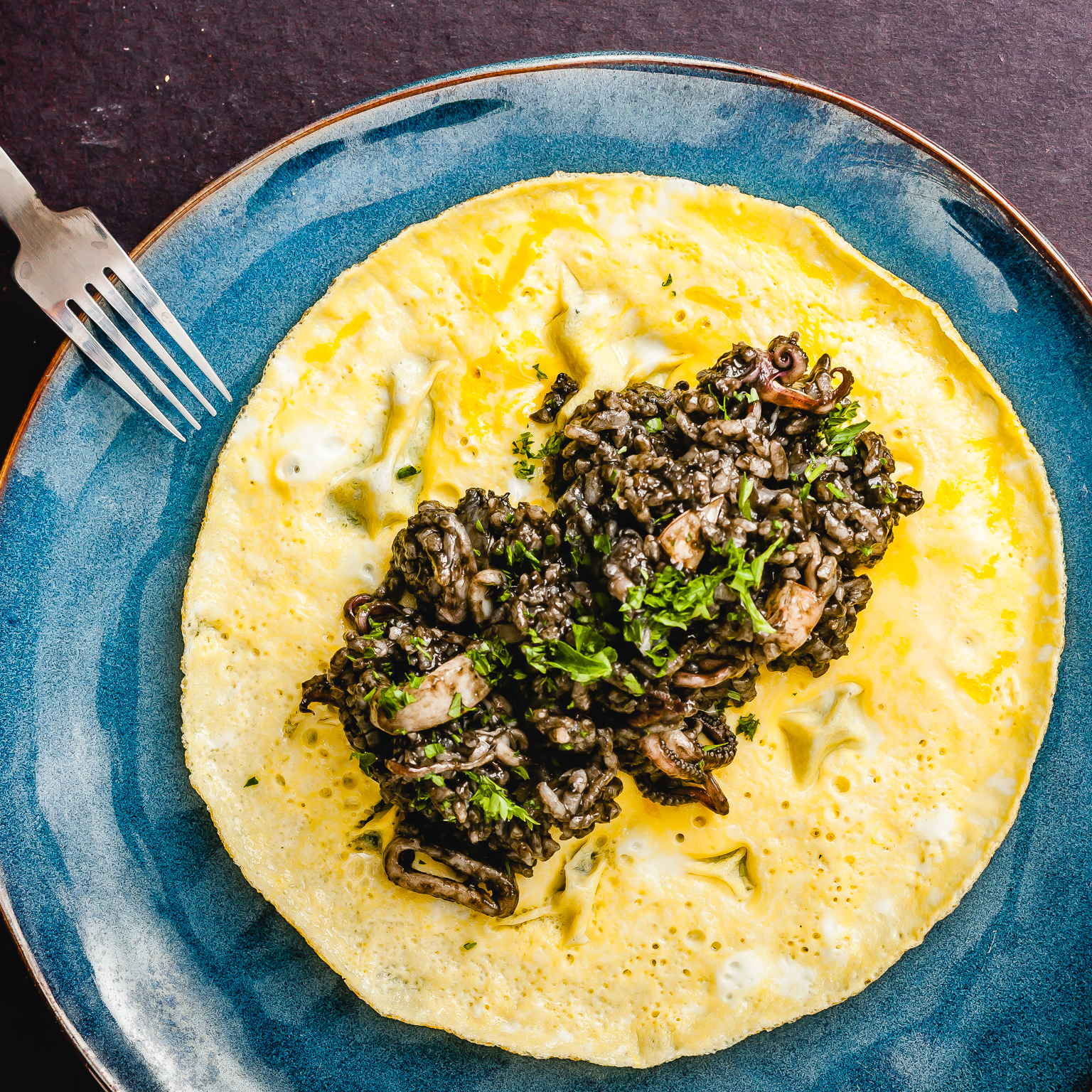 I’ve spent years reading food blogs (exciting life I know) and I’ve fallen in love with so many. Perfect recipes and techniques and execution, not to mention picture-perfect dishes.  It is rarely the case a blogger writes about failure but when it does happen it is so refreshing and for some reason. Maybe it is the novelty of it but it makes for some of the most interesting posts in my opinion.  Googling up “perfect short ribs” I don’t expect millions of stories on how to screw up the perfect shot ribs recipe but every now and then, that article pops up with a kitchen disaster story and I love it. This is the story of how a disastrous execution turned into a delicious meal and the lessons learned.

The main issue here. Never go into the kitchen without a clear idea of what you’re gonna make. This approach doesn’t work for me. I have to have a clear picture in my mind of what I wanna make, including cooking technique, plating, etc. In most cases, If I try to “freestyle” it things tend to go wrong.

First, I don’t know what to call this concoction, but it was rather simple, maybe the reason I thought I could just bang it out. Make a base of tomato sauce, squid ink, garlic, and onion and then cook some squid and shrimp in it. Serve with some bread. Done. When cooked well this is heaven. Well… not so this time. Like Murphy once said.. “if seafood is to go undercooked and slimy, it will”. The squid had a slimy texture. Actually, the whole thing had a slimy feel. The squid was a little undercooked. So was the shrimp. All kinds of textural issues. The flavor lacked complexity and was heavy-handed. Too much squid ink. The whole thing tasted salty and quite honestly a bit yuk. WTF.

Lesson #1: Seafood cooks quickly but not that quickly.

On a hot pan, squid and shrimp don’t need more than a couple of minutes to get properly cooked, so keeping that in mind I decided to cook them in the squid ink-tomato sauce. It was simmering so what more heat did I need. I added all the seafood to it and stirred for a couple of minutes. Turned the heat off and let the pot sit for a few more. Maybe because the seafood was cold from the fridge and I wasn’t stir-frying it in really hot oil I underestimated the timing, maybe it just wasn’t my day. And another thing: It is impossible to tell if things are cooked by looking in a pot where food’s smothered in black squid ink.

Lesson #2: Leaving the shrimp shells on was a blessing in disguise.

I love leaving the shells on shrimp for cooking. Do it all the time when making paella for example. Makes for a messy but super tasty meal. Now when your shrimp is smothered in a black mess of squid ink goo… not everyone is ready to jump in and shell these guys. Especially not undercooked slimy shrimp… but the flavor was there, hiding in the grotesque appearance of this preparation and waiting to be discovered. Waiting.

I didn’t add minced habaneros to the dish. I’ve been fermenting whole habaneros and garlic for months. I love to use the brine in cooking. By the way, if you haven’t gotten into fermentation, do yourself a favor and start now. Ok, back to this story. I also used the garlic cloves from this jar. I never thought capsicum would go SO well with squid ink. I was dead wrong again (luckily this time) because it is a wonderful pairing and I ended up adding more fermented brine to my pot after tasting it a couple of times until the heat was right. Some like it hot. I know I do.

Lesson #4: Cut saltiness down by adding unseasoned stuff… rice in this case.

Now that I had made a whole 2 pounds of overly salty slimy seafood I wasn’t just gonna give up and I was definitely not gonna suck it up and eat it. That would drive me insane so I had to come up with a way to fix it. Squid ink is pretty salty. I guess that’s how it stays preserved indefinitely and I failed to factor this into my salting calculations. I added salt to sweat the onions and also added the pickling juice from my garlic/habaneros which is 3% salt as well. A dark hot salty mess almost beyond salvation. Here comes rice, always to the rescue. I cooked about a cup of sushi rice which I rinsed until the water ran clear to remove all the unwanted excess starch otherwise this dish would have gone from slimy to outer-space alien gooey. Instead, the rice was fluffy and totally unseasoned (on purpose). I folded it in with my squid ink disaster and left it in the fridge overnight pretty hopelessly and saltiness issue solved. Little did I know…

Lesson #5: fridge-overnight food should have a chapter in cookbooks.

Why is this not a bigger deal in cookbooks? like I’ve only heard references to it in the context of stews. Food left in the fridge overnight can taste better the next day. Hell, food left in the fridge for a few days can taste better than freshly made. This happens so often! Are we just afraid to admit it? I think we’re just too obsessed with “fresh” and unnecessarily too afraid of germs. If stored properly in the fridge, food will “cure” overnight and develop a ton of complexity that wouldn’t be there otherwise and that’s exactly what happened to my squid ink “stew” now turned Asian “paella negra” or squid ink paella.

I like my microwave. I know some people hate them. I know some people look down on them but I like them. They do what they really well. They heat up fat and water molecules very efficiently and if you know how they work you’ve probably already included them in your kitchen gear lineup. I cook with mine all the time but this is beside the point here. Like reheating cold pizza (don’t use your microwave to reheat pizza please, stick it in the oven) I threw my slimy squid ink rice next to that magnetron and let it do its thing. Exactly 5 minutes later after a few “heat distribution” pauses the rice was finally warmed up. It was actually really hot and definitely close to boiling point again. Slime issue gone. I’m not saying that because I used a microwave my slime issues were fixed. I could have re-heated the rice any other way. I just needed to cook the seafood a little bit more and accidentally this happened in my microwave with the push of a button. Maybe two.

Lesson #7: Shelling and friendly bite size for a friendly meal.

After 1 if not 2 night in the fridge and having re-heated the rice in that microwave I decided it was time for the shrimp shells to go. They had served their purpose for sure. Now they were just an annoyance. I fished them up with my bare fingers. They were submerged in hot boiling squid ink rice. I will admit, it was painful. Took a little while but I ended up with a pound of shelled shrimp on my cutting board. Using the sharpest paring knife I sliced them one by one into friendly bite-size pieces and returned them to the rice. The shells were thrown in the garbage disposal never to be seen again. Perfect squid ink rice now. No shells, no slime, perfectly cooked seafood, perfectly seasoned. I knew then I was gonna be able to sleep that night.

Because it’s been a while since I cooked them and because eggs are what cooking is all about… for me at least. If you’ve ever had omurice, that would give you an idea of what my dish kinda ended up like. An open spicy squid ink seafood omurice (omelet). I made a simple 2 egg omelet, added about 2 Tbsp of whole milk and again, no salt and cooked the thing on a single layer in a nonstick pan over low heat with the lid on until set. And if you’re wondering about eggs keeping them in the fridge overnight or longer, don’t. There are exceptions to lesson #5 and eggs are probably at the top of the list… but yeah, a bed of carefully cooked eggs was the perfect stage for what I considered the best kitchen accident in my recent cooking history. Once folded over, this still-soft-boiled-at-the-surface omelet connected all the dots and what started as a questionable and almost disgusting meal 2 days ago, ended up on my top ten list.

1 pound of shrimp. Shells on. Later shelled and diced.

1 pound of squid. Cleaned and sliced. If you have to clean them yourself, google is your friend.

4 lacto-fermented garlic cloves. Regular ones will do too. Thinly sliced.

Instructions (if you wanna replicate this tasty “disaster”):

Sweat the onions in some olive oil until translucent. Add the tomatoes and cook over medium heat until they turn a darker shade. Add the garlic and the squid ink. Add the lacto-fermented brine. Cook the liquid off for a bit. Add the seafood. Cook for about 2 minutes.

Store in your fridge overnight. Make a cup of steamed rice with no seasoning. I used sushi rice. Fold them together and microwave for 3 minutes or so. You know your microwave so cook until steamed. I pause at intervals to allow for carryover heat to move through the food.

Shell the shrimp and dice. Add back to the rice. Discard shells. Add a drizzle of olive oil at this point. Reserve.

Make the omelet. Beat the eggs with the milk. Try not to incorporate air into the mix. Cook over medium-low heat on a nonstick pan with the lid on until set.

Plate the omelet and top with the squid ink rice. Sprinkle finely chopped parsley. Now you can serve it immediately. 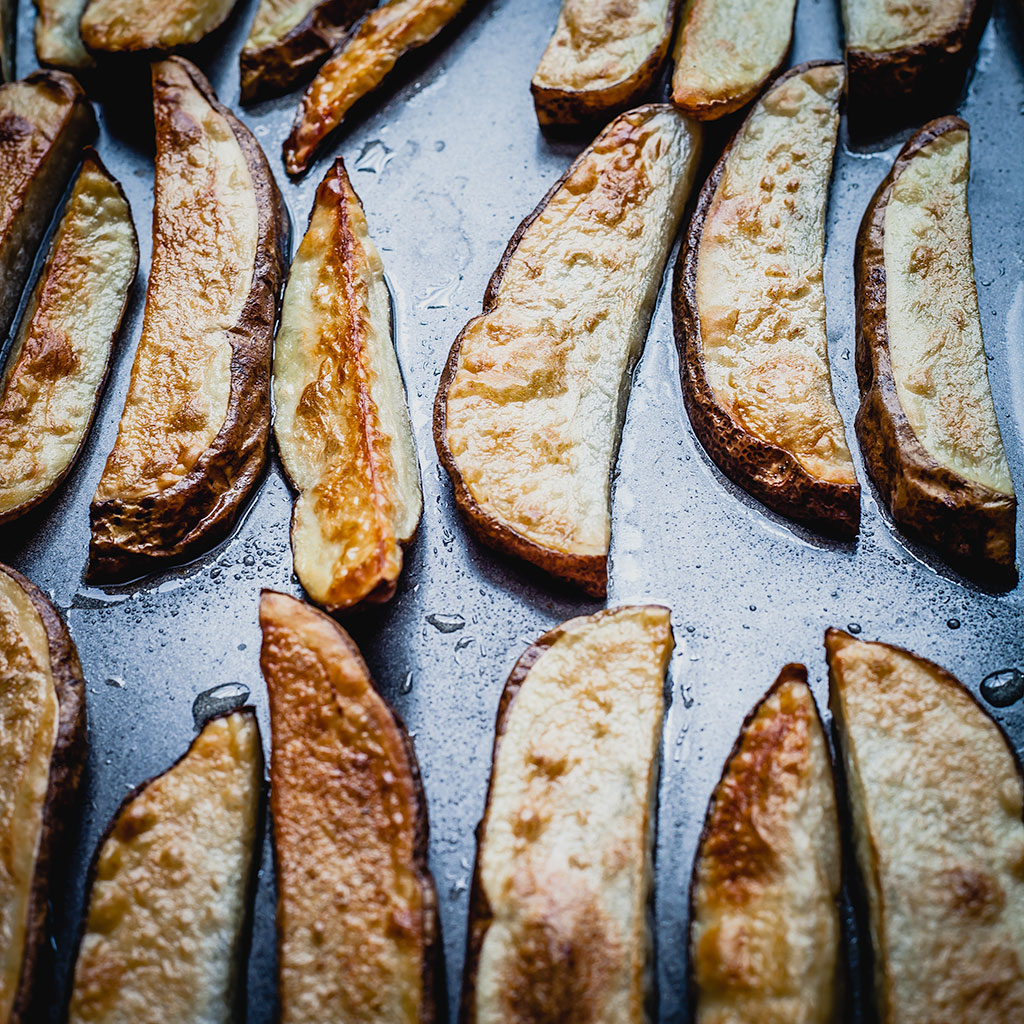