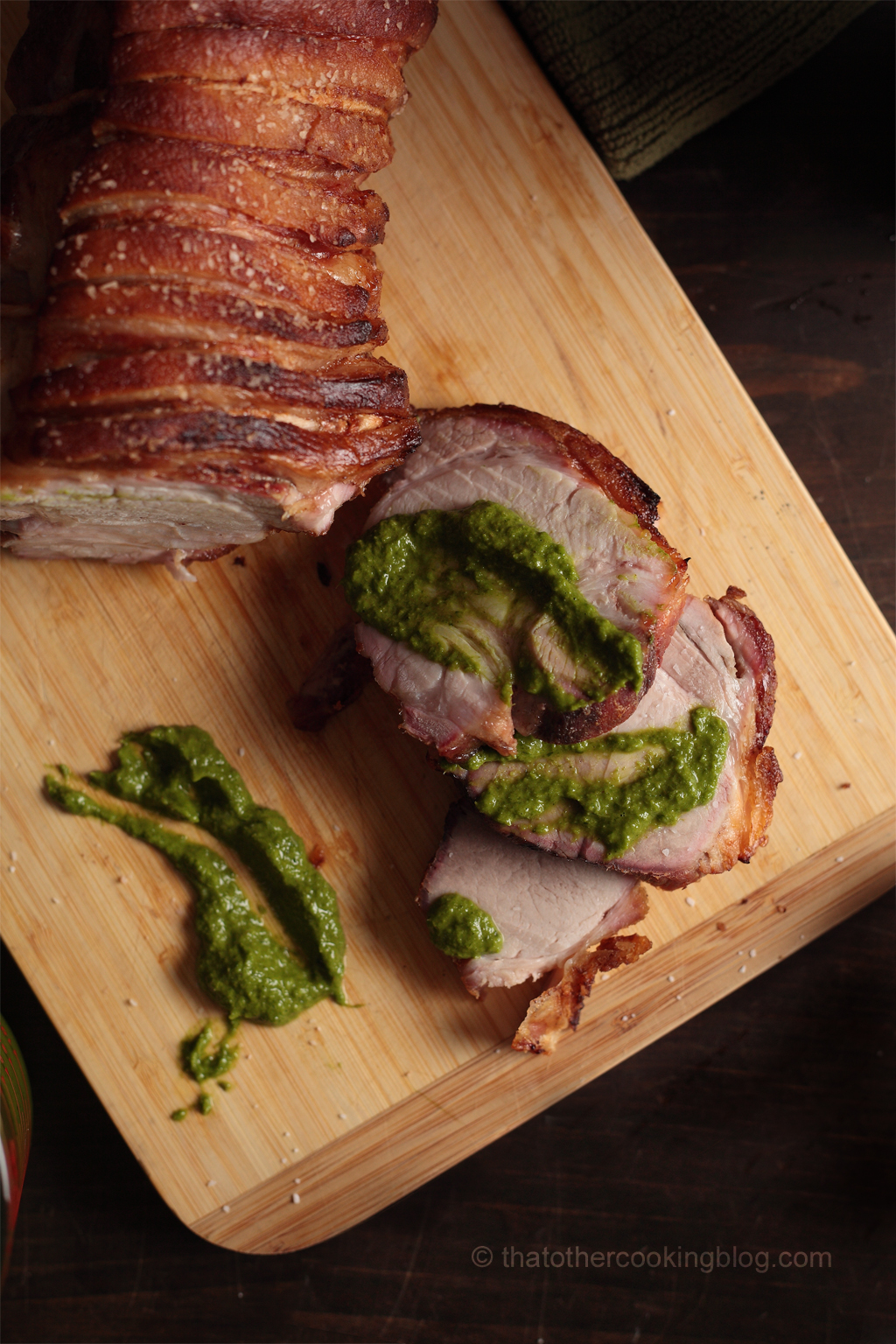 I know… still, tomatoes and  salad and grilling season out there and today’s post could be a holiday meal. I personally think that delicious food like slow roasted meats should be more common throughout the year if we love them so much. Specially because they are so easy to make and the only thing deterring some of us is the fact that they take up hours… luckily those hours are allocated to the simple task of waiting. Preparation time of a roast takes minutes.  And the waiting time can be spent doing whatever as long as we don’t leave the oven unattended.

I’m going to use this post to talk a bit about brining, which adds even more time to the already long process, but believe me, if you like succulence and great flavor throughout an entire volume of meat, this is worth learning. The good news is, brining isn’t difficult at all. It requires long idle times, the bigger the piece of meat, the longer the time the brine solution will need to get to the core (works exponentially actually, take for example 1 inch thick portion of chuck requires 1 day in the brining solution, 2 inches require 4 days to brine… and so on), but I’m getting ahead of myself here. Let’s explain what brining is and how it works.

Here, a excerpt from a very popular brining document by Julia Collin:

Brining works in accordance with two principles, called diffusion and osmosis, that like things to be kept in equilibrium. When brining a turkey, there is a greater concentration of salt and sugar outside of the turkey (in the brine) than inside the turkey (in the cells that make up its flesh). The law of diffusion states that the salt and sugar will naturally flow from the area of greater concentration (the brine) to lesser concen- tration (the cells). There is also a greater concentration of water, so to speak, outside of the turkey than inside. Here, too, the water will naturally flow from the area of greater concentration (the brine) to lesser concentration (the cells). When water moves in this fashion, the process is called osmosis. Once inside the cells, the salt and, to a lesser extent, the sugar cause the cell proteins to unravel, or denature. As the individual proteins unravel, they become more likely to interact with one another. This interaction results in the formation of a sticky matrix that captures and holds moisture. Once exposed to heat, the matrix gels and forms a barrier that keeps much of the water from leaking out as the meat cooks. Thus you have a turkey that is both better seasoned and much more moist than when you started.

Check out the whole document here

Also, you could check out what the guys at chefsteps.com are doing in regards to what they call equilibrium brining.  It is pretty interesting although I wish they had a bit more information on that article  The same concept of traditional brining is at work, but this makes it virtually impossible to over-brine (over salt) anything, and the brine reaches the entire volume at the cost of longer and extended brining times, very similar to sous vide cooking of tough cuts. Anyways, check it out if this sort of thing interests you.

Ok, now that we have a better understanding of how brining works, let’s get back on track and talk about our boston butt! What’s a boston butt? well… I had no idea until I did some research, turns out that a boston butt is in fact the shoulder of a pig and has nothing to do with the animal’s behind. Here’s an excerpt from The Food Lab on boston butts:

See, at some point in our colonial past, Boston was well known for its pork production and would often ship preserved pork (most often front shoulders—the least desirable part of the hog—but often hams and heads as well) in large wooden barrels. These barrels were of the size officially known as “butt” or “pipe.” That’d be a 126 gallon barrel half the size of a 252 gallon tun, larger than a 84 gallon firkin, and twice the size of a 63 gallon hogshead (which, incidentally, have nothing to do with actual hogs or heads). The pork-filled barrels shipped out across the country came to be known as Boston Butts, a term which was soon applied to the meat inside, despite the fact that it actually came from the shoulder of the hog.

As much as I would have loved to cook this beautiful piece of meat whole in a sous vide bath, that would require some serious industrial equipment which I obviously don’t have and don’t expected anyone at home to do either. For centuries pork has been slow roasted and enjoyed by mankind,  this is where my oldest cooking friend comes into play, my battle tested oven. Enough literature, let brine and roast some pork butt!

1 Tbsp turbinado sugar (any sugar should do)

2 liters of cold water (I added ice to the blender, I like to work with cold brines and cold meat)

Brining is really simple. Measure all the ingredients, and blend in cold water. My blender capacity is one quart so I had to blend the solids in one quart, place in a larger container, and then add an extra quart of cold water to finish the brine by mixing everything well.  If you really want to play it safe, boil the brine and then refrigerate it until cold. Either way, make sure you’re working clean, clean tools, clean hands, as you would if cooking anything else, safety first.

Notice I have scored the rind layer of the pork butt in half inch strips. This serves a few purposes but is not entirely necessary, so if you want to skip, do. I like the scoring because allows the butt to preserve its shape a bit better while baking (this is less critical with bone-in cuts). It allows the rind to crisp up a bit better by increasing surface area thus allowing it to dry and brown quicker. It also allows the brine to penetrate better under the thick fat layer. And it happens to look cool I guess.  I’ve also tied the roast with butcher twine to help preserve its shape while roasting.

Ok, so now you have the brine solution ready, and the pork ready, all you need to do is submerge the pork in the brine solution and make sure it gets fully covered. I didn’t have a good size container to do this so I used an oven bag which I placed inside my dutch oven which I later filled with some water to help push the bag walls upward to make sure the brine would cover the meat. If you have a good container, please avoid all these headaches and do it right. One day I will get a good container to work with this size of meat. I have larger ones ,but I didn’t want to make gallons of brine just for this one piece of pork.

Once brined. Wash the pork butt. Don’t let any solids on the surface that might burn while roasting and impart bitter off flavors. Then using paper towels, pat the surface dry. You can place the pork on a wire rack over a baking sheet and place in the fridge for a few hours, or overnight, to let the surface really dry. This will cut down the roasting time a bit, and the skin will become crunchier and brown faster.

Coat the pork with olive oil. This is going to help the surface develop that wonderful color.

Preheat the oven to 500F and allow at least 30 minutes after the preheat cycle is done.  Place the tray/wire rack with the pork in the middle rack of the oven. Straight out of the fridge.. no need to give this meat any rest time to reach room temperature. That works well for smaller portions.  Won’t make much of a difference here.  Bake for 30 minutes. You will hear the skin sizzling. After 30 minutes… open the oven doors, and lower the heat to 190F.  The sizzling should subside in about 10 minutes or 20 minutes.. and then you can close the oven doors again. If the surface of the pork looks already dark, you can place a oven safe container with water inside the oven to bring up the humidity level and slow down the browning of the pork. This won’t affect the internal cooking.  Cook at 190F for 4 hours.  Allow to rest for about an hour.

The pork is done, and done! It deserves some rest. Now we can focus on the chimichurri sauce. Which I will soon make into its own post, to help keep my recipes organized and easy to search. But I will get to that later. This sauce goes incredibly well with pretty much any meat you can think of.. yes, fish too. Mainly made out of parsley and cilantro, although I’ve seen many variations, some even don’t use cilantro (which I find weird) and use fresh oregano instead… some include mint.. and many like to add a bit of heat by employing cayenne pepper or chili pepper. I’m keeping my version pretty simple and you can build on top of it if you like So here is it, chimirruchi sauce:

50g white wine vinegar (plus a couple of tbsp to adjust)

50g onion (plus a little more to adjust)

1 tbs kosher salt (adjust at the end if needed)

The preparation of chimichurri sauce is a no brainer. Just chop everything coarsely before placing the ingredients in the blender or food processor and mix until you reach the desired texture. The mixture might need some time to come together. Patience. Pulse, stop, push down the ingredients with a wooden spoon, they will stubbornly resist to get blended, another pulse, it might require some time before the blender creates a smooth mixture that flows like a sauce. The food processor offers a better option but will yield a chunkier finish if that’s ok with you. I like it blended to a fine fine consistency, although I don’t strain it through a sieve.  If you lose your patience and add more liquid (oil or vinegar) you will most likely end up with a watery or oily mess that has no consistency and the flavors aren’t balanced. If you try to cook off the extra vinegar, your sauce will lose its sharpness and it won’t be chimirruchi anymore. All ingredients must be raw.

One last and very important thing. Chimichurri sauce is best the next day. The presence of the components of the sauce is very loud at first, and a few hours later, a more pleasant flavor develops. Allow your chimichurri sauce to rest for a least a couple of hours before serving, but preferably overnight.

Ok fellow cooking enthusiast, this is all I got tonight! I’ve enjoyed putting together this post and I hope it gets some people excited and ready for the upcoming holiday cooking season!  Until the next post which should be coming up shortly! thanks for stopping by! 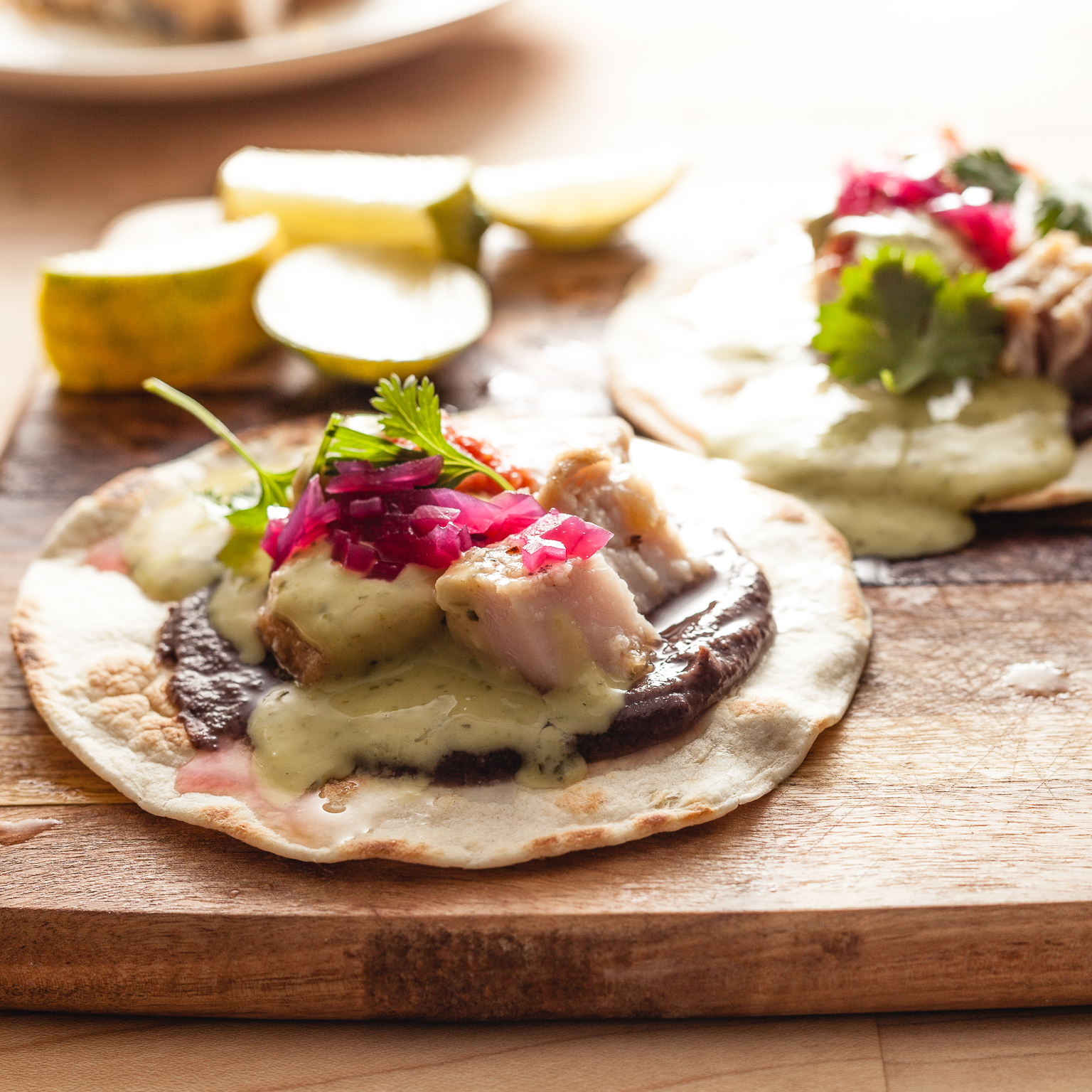 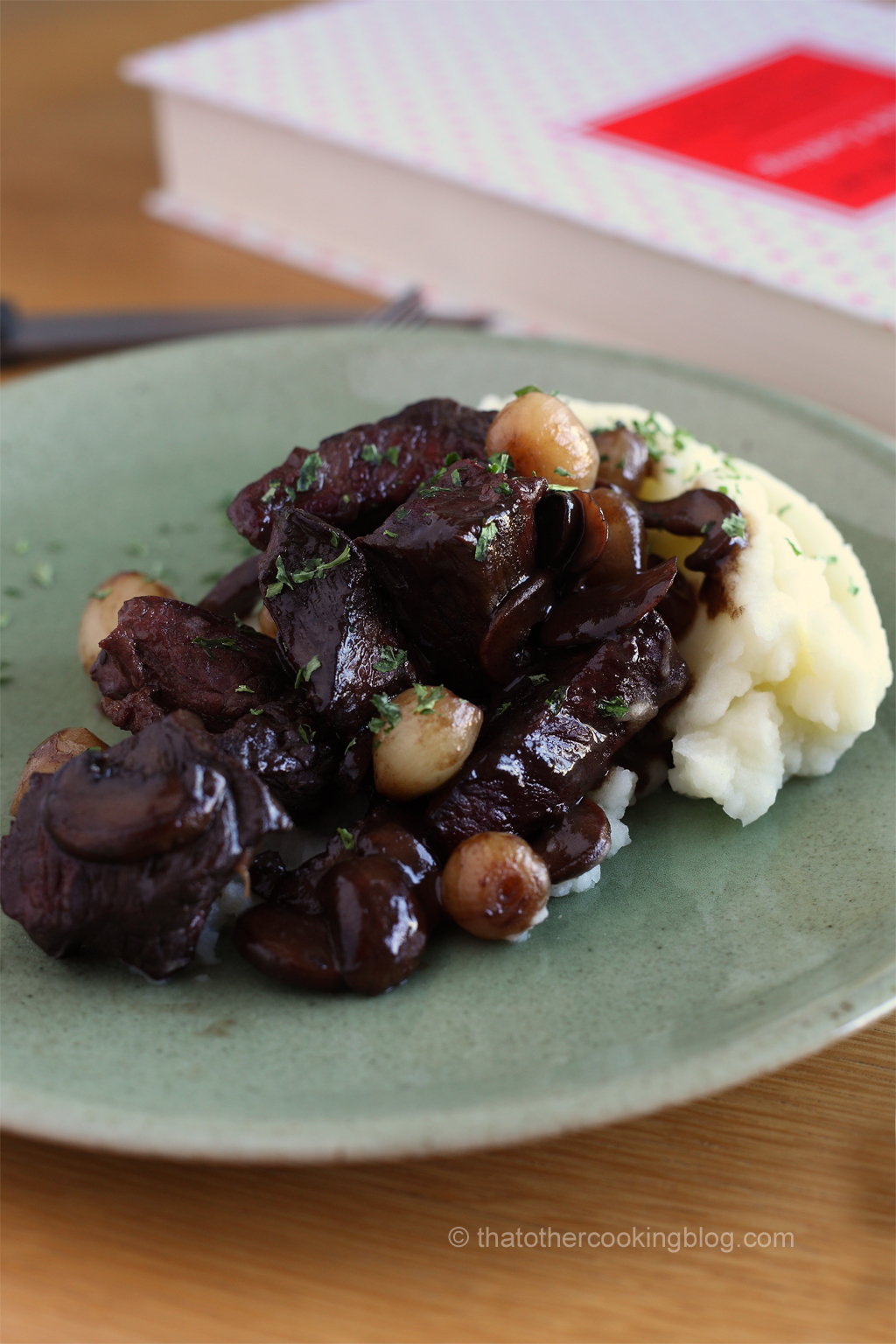 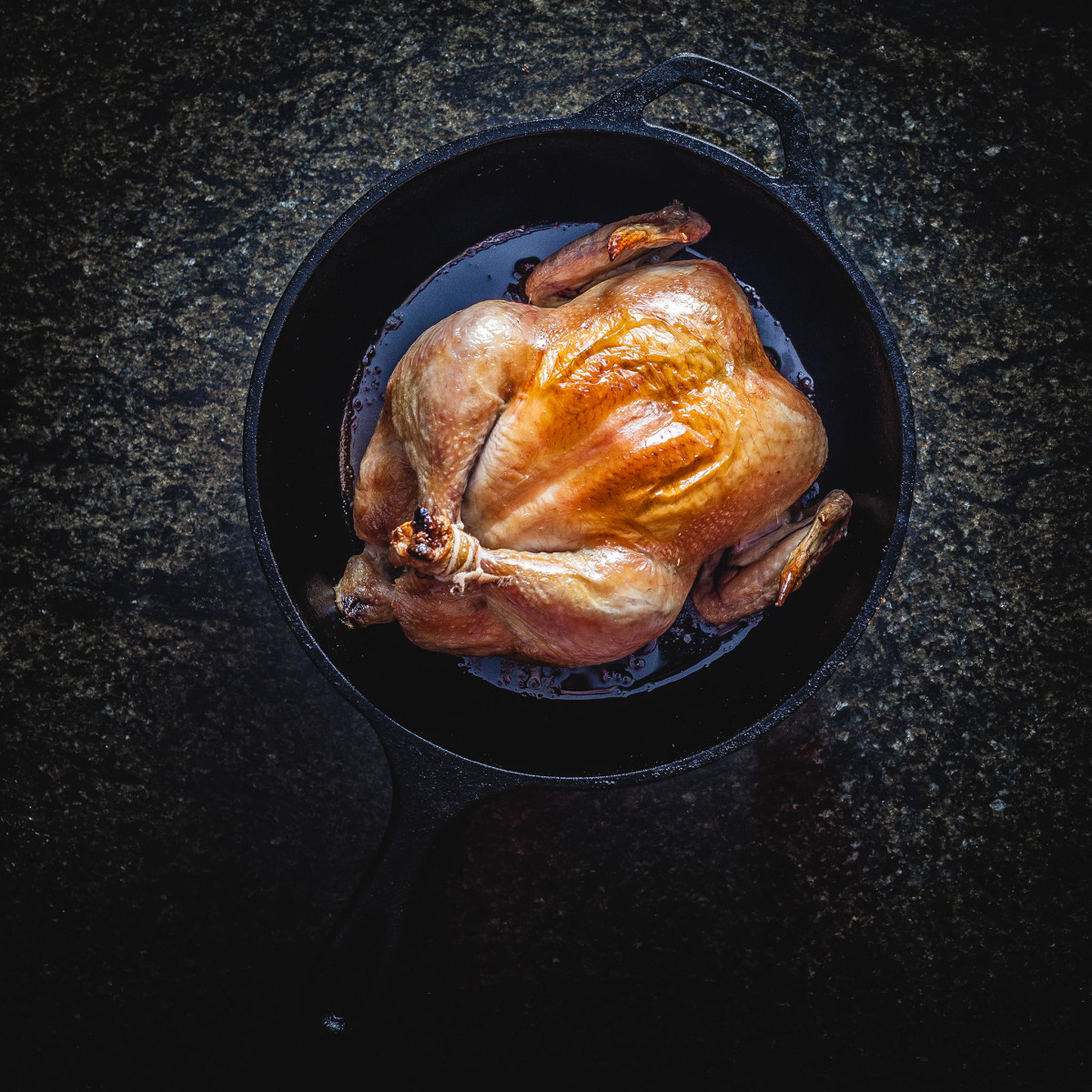 The Simplest Roasted Chicken I Can Think of.