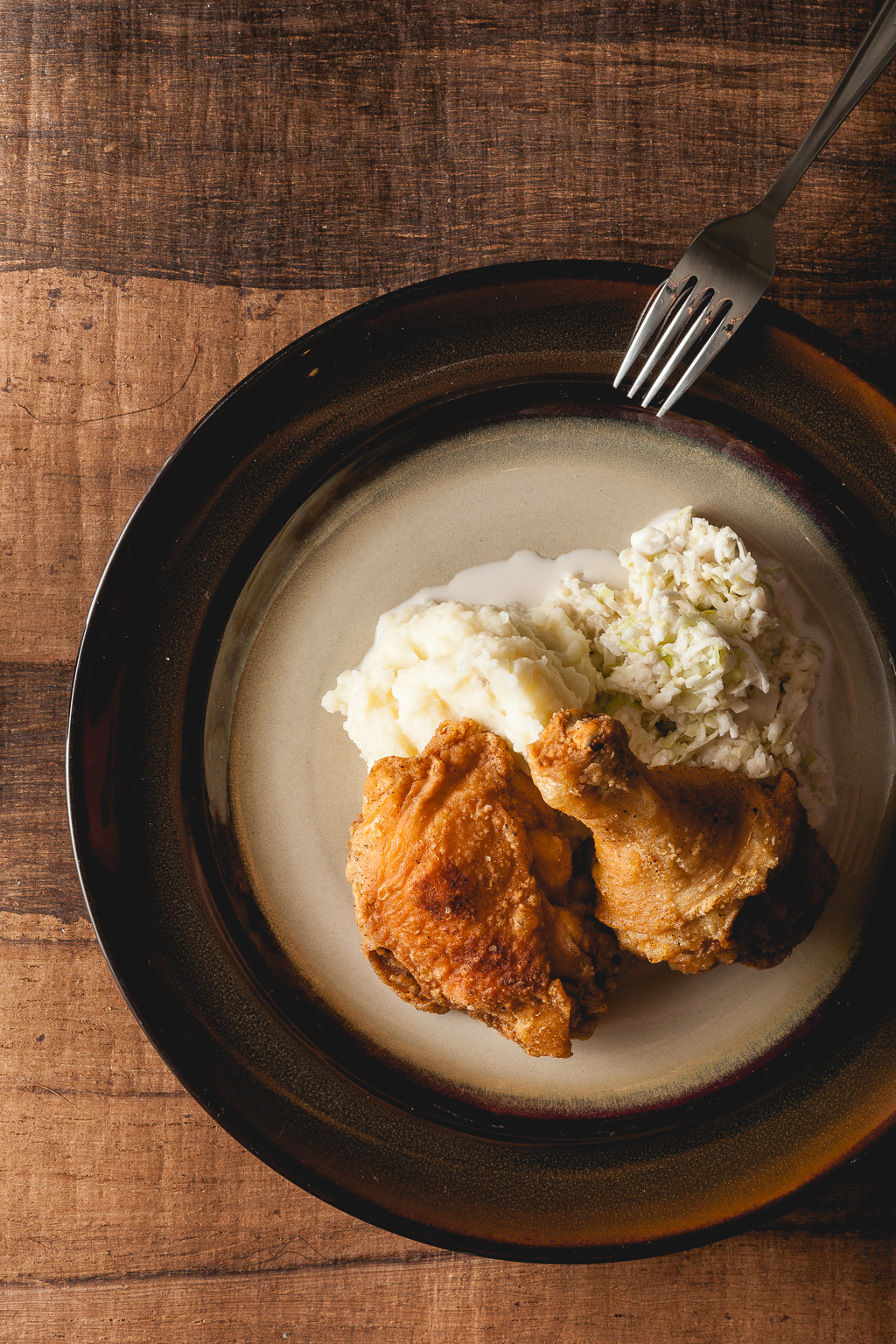 If there is such thing as purpose in life, the purpose in the life of chicken would definitely be becoming fried chicken. Hmmm, that was probably a bit harsh, but hey, it’s my honest assessment of what happened to most chickens I’ve met. If you like eating chicken, fried chicken is one of the most delicious things you can do with it next to roasting or sous vide cooking it. I have tried sous vide AND frying combined. Freezing the cooked meat and then deep frying it just to get the proper crust with a perfectly cooked inside… it’s all great but a lot of extra work and to be perfectly honest, a waste of time . You can check out my first standard fried chicken post here. And some sous vide/freezing experimentation here.

I will stand by it. Making fried chicken doesn’t really need any fancy sous vide technique or careful temperature control. The problem is, chicken skin takes forever to brown and so do flour coatings, so unless you up the frying temperature by a lot, no matter how you approach the cooking, the meat will overcook. You’re thinking liquid nitrogen, I know..  (ok, maybe you aren’t) well good luck finding that stuff and living through the pain of using it. Don’t despair though.  Like I said, a great fried chicken is attainable with your stove, some flour and oil.  Juiciness and crispiness achieved by conventional and simple cooking techniques.

Only use the dark meat.

No need to bother with the white stuff. If you’re on a diet, maybe you shouldn’t even be considering fried chicken to begin with. Chicken breasts have a place and it isn’t inside a deep fryer. Meat that lean will simply dry out and turn to rubber too easily. Dark meat in the other hand, can be abused by heat and still be juicy but don’t abuse it too much, it does dry out eventually. Use dark meat skin on. No skin, no fun.

How to coat chicken for frying.

This can be achieved in a number of way. I kept the coating aspect of this recipe as simple as possible. Hence the title. I did a single coating and no liquid of any kind. Using the chicken’s own moisture. That’s a pretty standard technique that can be used with other meats and preparations too. No need to dip the meat into dairy liquids… although if you want crunchier crust, this is a must. You can go from a single coating pass to as many as you like but I would probably recommend 3 at the most. After that, the crust might get too thick and oily. So back to the simple way of just dusting the chicken in flour only once with no additional liquids. This makes for a very light crust, extremely crispy. I was really happy with it. It did not distract from the awesomeness of the chicken underneath.

What else did I put in my flour mix?

I had chilli powder, garlic powder, cracked pepper, salt. I should have probably added a tiny bit of baking soda. Not to make things airier which it probably would, but to get that golden crust quicker. Baking soda raises the Ph and the maillard reaction speeds up. Things brown faster. Ask the experts.

How to time chicken in a deep fryer.

This is one of those things that takes practice. If the chicken is frozen, things could go wrong. The crust could overcook while the core is still undercooked. I suggest working with unfrozen chicken at refrigerator temperature. That’s totally fine and if you season it with salt, you can leave the chicken out and let the salt diffuse into the meat for an hour or so. Adding salt to chicken for less than that will probably do nothing. Like salting a steak right before it goes on the searing pan, no seasoning. But back to timing. The easiest thing to do is to trust your eyes. Flour will take a while to brown in the deep fryer. When the flour coating turns golden brown you can rest assured your chicken is ready.  And not just ready. Perfectly ready. So forget about timing it really. Although if you should ask, it takes about 7 minutes at ~375F.

Cole slaw is the reason food processors were invented. At least that’s how I felt after I made it the other night. I shredded a whole cabbage in less than 5 minutes and no mess. That shredding attachment I never new what to do with? that thing is brilliant. Cole slaw is really easy to make. I didn’t have carrots but you’re good with just cabbage.  A ton of mayo, some sharp vinegar and sugar to taste. Sugar is a really important component in cole slaw. Don’t be shy. Cole slaw is meant to be on the sweet side. That even rhymes.

I could write forever about mashed potatoes. I love them. Boil your potatoes (cubed skin on) in salty water until fork tender and then the fun part begins. I recently bought a potato ricer. I’ve been putting it off for years. Having done my fair share of hand mashing I felt it was time to introduce this amazing device into my tool repertoire. It’s staying. That thing works miracles. Rice all your potatoes, add back some of that potato water, finish with as much butter and cream as the potatoes can hold while still holding the right consistency. I added some grated parmesan cheese as well and one or two garlic cloves, grated using my microplane. Season with salt. Don’t add pepper unless you don’t mind the black peppery specks. I do. I like my potato mash as clean as possible. Sometimes I leave the potatoes skins in there but not often.

Well, yes, it is a bit of work but nothing crazy. If you have all the ingredients at hand you can pull this off in a couple of hours. While the chicken is resting after you’ve cut it all up and salted it, it’s go time for some cole slaw. Potatoes can be started in a pot over medium-high heat, by the time you’re done with the cole slaw, the potatoes are just minutes away from fork tender status. Time for some push-ups while you wait. Get the deep fryer going (I don’t have one anymore, so I use a heavy pot, the heavier the better I say), it will take about 10 minutes to reach frying temperature, enough time to make the best mashed potatoes you’ll ever… make. Rice away, season, done. And now… the chicken. Just before addressing chicken needs, place the freshly made cole slaw in the fridge. Cole slaw in my opinion MUST be served COLD, just like revenge or some desserts. Ok, back to the chicken, get your flour mix ready in a big bowl, get the chicken next to it. Coat and fry, coat and fry. Don’t overcrowd the fryer and try to place all the chicken pieces it can fit in at the same time to ensure everything cooks at the same time.

Up to you or match the pics.

This chicken was what KFC represented when I was 9 years old. Perfection. 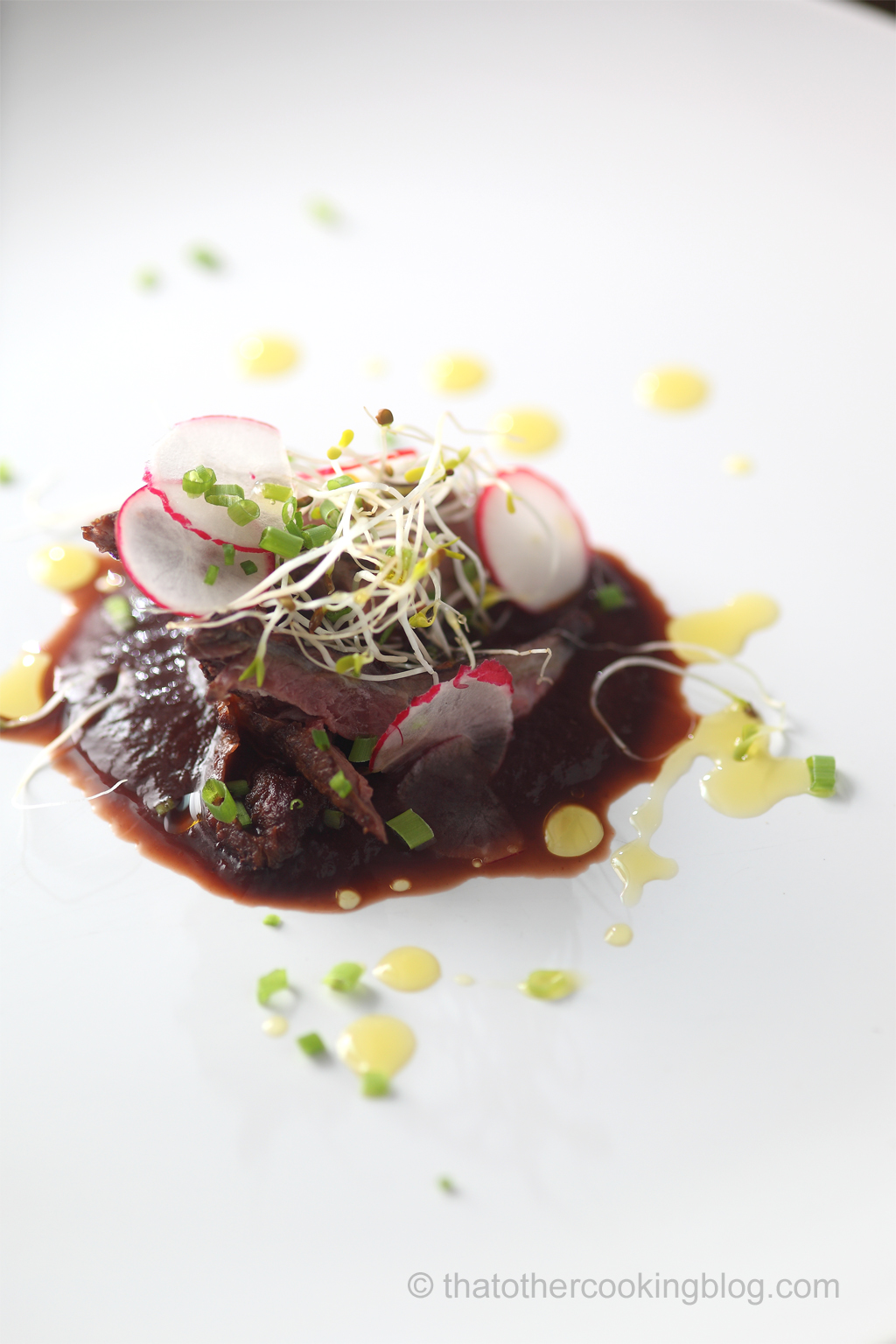 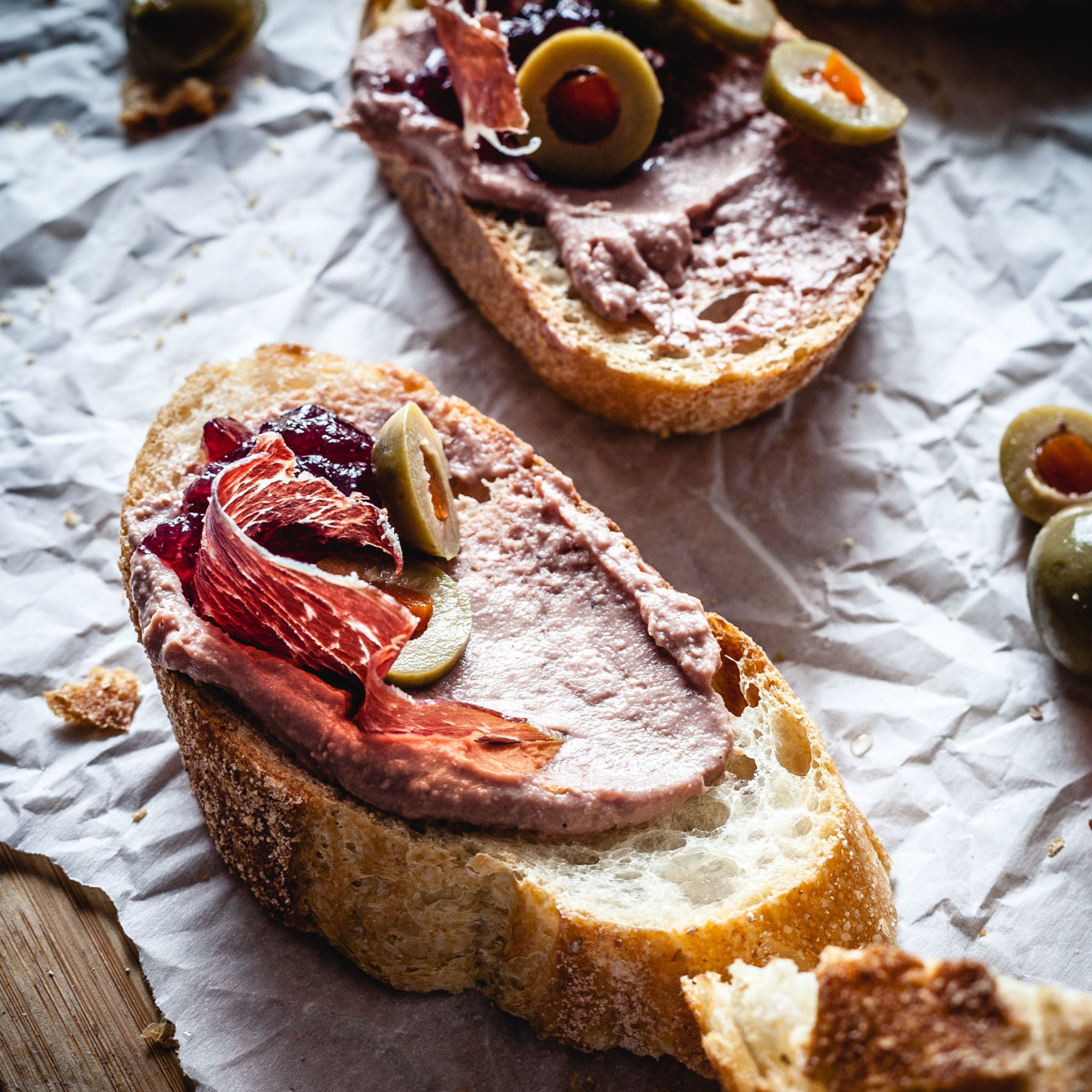 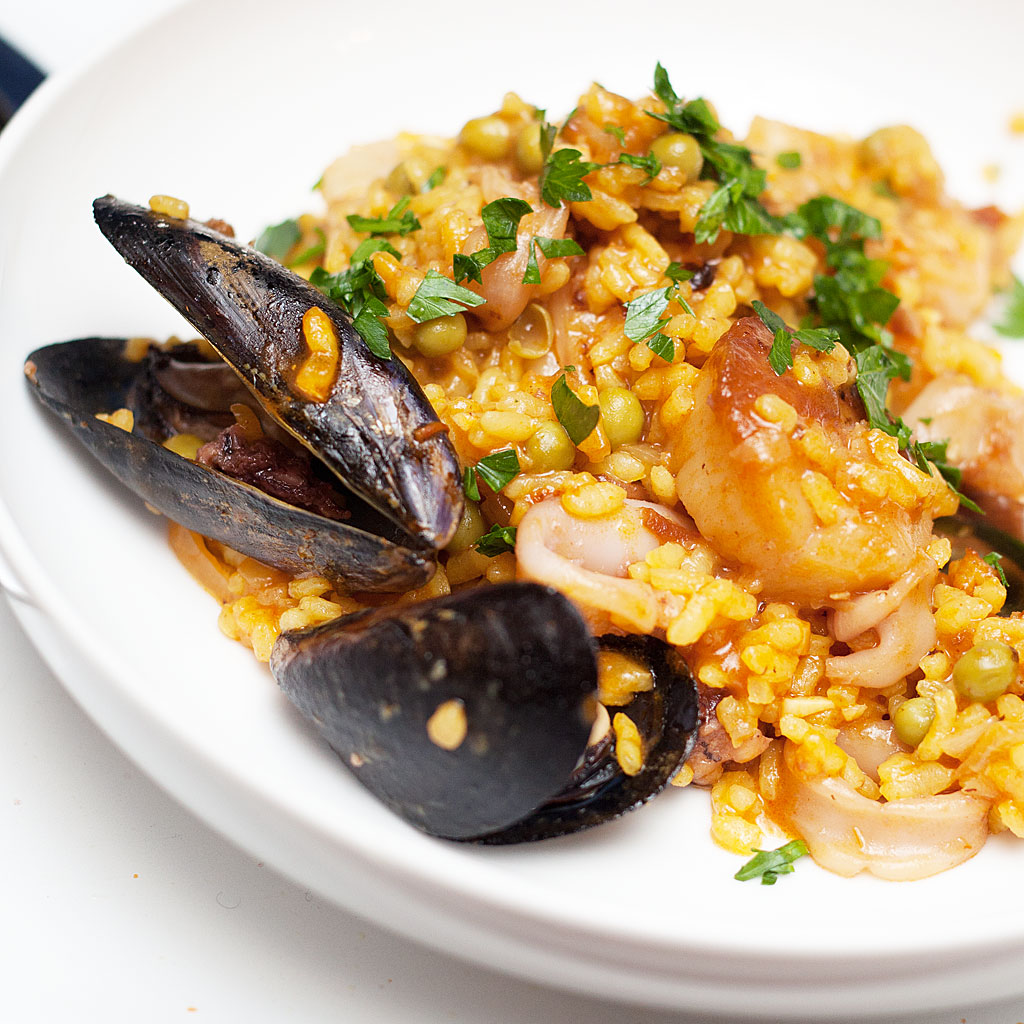 seafood paella : what else do you need me to say?